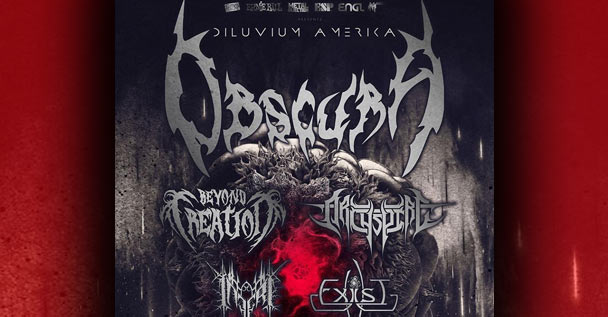 UPDATE – The dates are here!

Original Story – Quite the tech death assault is about to sweep up North America! No less than Obscura, Beyond Creation, Archspire, Inferi, and Exist will be teaming up to bring a level of note density that’s rarely seen under a single roof – let alone a whole tour’s worth of roofs!

Obscura’s vocalist and guitarist Steffen Kummerer had the following to say of the band’s return to North America:

“Obscura finally return to North America with an extended headlining tour supporting our brand new record ‘Diluvium’ which marks the end of a ten year, four album cycle. With Beyond Creation, Archspire, Inferi and Exist we return to the United States and Canada with the most extreme tour of the year. We can’t wait to hit the road again and present you songs off all four records ‘Cosmogenesis’, ‘Omnivium’, ‘Akroasis’ and ‘Diluvium’.”

In other news, Obscura have an all new album “Diluvium” out July 13th through Relapse Records. Pre-orders are now available to those who CLICK HERE! A brand new single for this came out today! You can give a listen to it by CLICKING HERE.