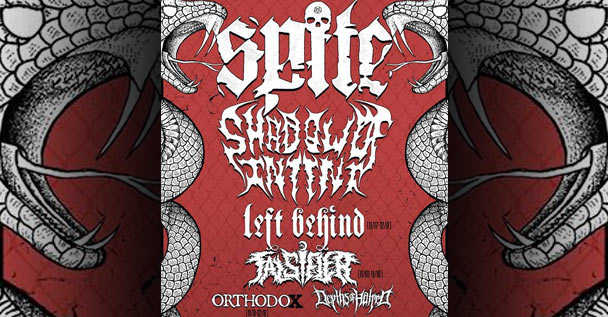 Spite and Shadow of Intent are teaming up to co-headline a tour of the United States. They’ll be joined by Depths of Hatred for the entirety of the trek with Left Behind, Falsifier, and Orthodox for select dates. All the info can be found on the flyer up above.

Spite had the following to say of the tour:

“USA! We are proud to announce the KILL OR BE KILLED TOUR with co-headliners: Shadow Of Intent, and support from Left Behind, Falsifier, Orthodox, and DEPTHS OF HATRED. Tickets on sale Friday.”

Here’s what Shadow of Intent had to say of the venture:

“We are very pleased to announce that we will be doing a Full US Coheadlining tour with our friends in SPITE. We’ll be joined by a bunch of cool bands including Left Behind, Falsifier, Orthodox, and DEPTHS OF HATRED. We’ll be playing songs we’ve never played live before with our longest set time yet! We can’t wait to see you all again!”