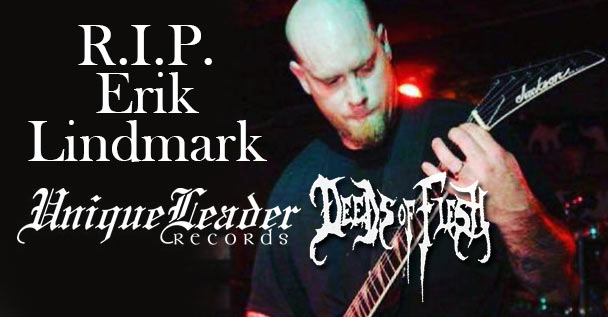 As such, a campaign has been launched to help his wife and daughter.

It goes without saying that Erik Lindmark made a huge impact on the metal community with his time here. He brought so many of our favorite bands into the spotlight and pushed them to levels of noteriety they likely would have missed out on otherwise. He also put out some great music through his work in Deeds of Flesh! For all of that, we thank him. His influence will be heavily missed.

Here’s the official word from the Unique Leader staff following his loss:

“It is with great sadness that we must announce that our CEO and founder, Erik Lindmark, passed away today after battling with Sclerosis.

The indelible mark he has left on the Death Metal genre is monumental, both as a business man and as a musician. After building this label from scratch with his Deeds bandmates, Erik took Unique Leader to a level he had never expected it, or the genre, to get to.

During his time in Hospital, Erik was absolutely implicit with his instructions to staff to go full steam ahead with the label in his absence- which is exactly what we intend to do.

That being said, we will not be releasing anything in January so that we can make the necessary adjustments and delegations within the company. We would like to thank you all for your well wishes, support and kindness toward Erik on socials and via private correspondence.

There is a Gofundme setup for Erik’s daughter Bella (5) and his wife.

Rest in peace Erik. You were a true warrior.”