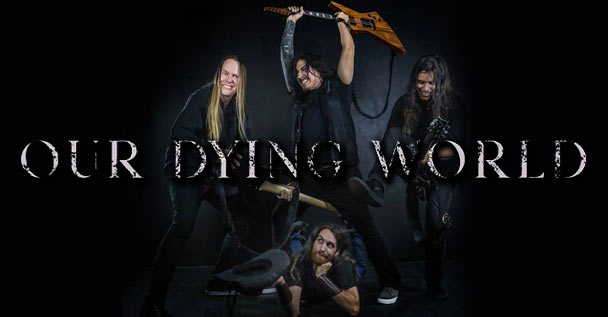 A metallic darkness is aggressively rising up from the city of angels. Our Dying World is the name of a new, four-piece band cobbling together some of the very best genre wide elements to deadly effect. The enjoyable outcome of their mad science could be recommended for fans of contemporaries from across the board though it mainly hovers in the direction of Thrash and Metalcore. The band themselves cite the likes of Testament, As I Lay Dying, and Devin Townsend and it’s not hard to see the sonic connection to these acts.

Our Dying World have been hard at work since their inception in the middle of last year. It’s all been building up to the anticipated release of their debut EP “Expedition” which is currently set to hit the world sometime in March… Keep your ears to the ground and stay tuned for much more news on this front!

In support of the coming madness, the band has launched two new singles to date! They go by the names of “Post Mortem” (with an impressive lyric video by the one and only Scott Rudd) and “Liberation”. They serve to show multiple sides of the band while simultaneously kicking listeners in the ass. You’re invited to give both of the above a good listen through both the Spotify and YouTube links provided across this page!

If you enjoy the new music as much as we do, it’s encouraged for you to keep up with the band as they ramp up to the “Expedition” release! This can be done through the band’s platform on Spotify along with a number of social networks including Facebook, Twitter, and Instagram.

It’s also worth checking out the band’s official website where they’ve provided much more information! This includes a wealth of news, links,  and even pre-orders for a brand new t-shirt!

Tune in and you’ll see how Our Dying World are bringing about new life through their brand of metal music! 🤘