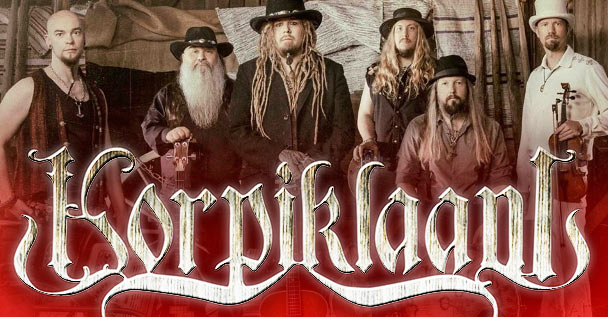 Korpiklaani have struck with yet another version of their beloved drinking song “Beer Beer (Bír Bír)”. This time around, we get a Czech rendition. You can find the track along with the official statement, as released by Nuclear Blast, just below:

Finnish Folk Metal Superstars KORPIKLAANI don’t seem to need any rest! After playing an extensive European tour with TURISAS and TROLLFEST in support of their latest studio album ‘Kulkija'(‘Wanderer’), the band is about to kick off an 8-show Australian & New Zealand run (w/ TROLDHAUGEN) tomorrow. But before the sextet continues their current touring cycle with a North American co-headline tour with their label mates in ELUVEITIE in September/October, KORPIKLAANI will perform a string of European festival gigs. In anticipation of these upcoming summer dates – starting at Metalfest Open Air, Pilsen (CZ) on June 2nd – the band has unleashed a brand new lyric video for the Czech version of their all-time favourite ‘Beer Beer’, which can also be found on the tour edition of ‘Kulkija’. Check out ‘Bír Bír’ [feat. FLERET] over on YouTube: https://www.youtube.com/watch?v=4drIAMzV7qg

FLERET comment, “The cooperation with KORPIKLAANI on the Czech version of their hit song ‘Beer Beer (Bír Bír)’ convinced us that even folk metal superstars like them can be nice guys with stellar manners. Not only did they prove this during the rehearsal at the Masters Of Rock Café in Zlín but also on the Masters Of Rock 2018 festival stage where we played with them after only one rehearsal of their song ‘Vodka’, our song ‘Vizovice’ and then – we believe we can say – our common song ‘Beer Beer (Bír Bír)’ with the Czech lyrics of our lyricist Jan Mrlík. That was a remarkable and exciting experience for us and hopefully for KORPIKLAANI as well. KORPIKLAANI, thanks to all of you!”

The track will be available digitally from Friday, May 24!