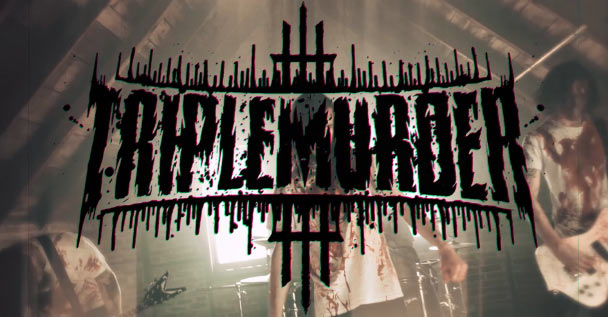 We have a premiere for you good people today! TripleMurder is an all around metal band currently building towards the release of their EP “Pre-Meditated”. In support, they’ve made a music video for the lead single “Cannibalistic”! Give it a spin for yourself right here:

Badass, but in a tasteful way is the best way to describe the debut single and video ‘Cannibalistic’ from Ottawa’s TripleMurder. The song comes from the band’s forthcoming debut EP “Pre-Meditated” slated for release later this fall and is a flurry of blood, guts, and breakdowns.

TripleMurder is a band with a lot to offer their listeners, everything from chunky groovy riffs, blast beats, to breakdowns and two-steps and everything in between they refuse to be set into one specific genre and consistently break rules over the course of their 6 song EP. They see their EP as a wake-up call, which they explain further:

“We believe that it should be received as a wake-up call to the metal industry that you don’t have to confine yourself to a certain subgenre of metal to write heavy tunes. It’s all about having fun and showing off everybody’s musical tastes in the band.”

With the single, TripleMurder is looking to send their listeners into a state of awe, and be content with hearing a wide variety of elements, and techniques that keep the music creative and unique. Metal fans of all kinds, from death metal to core fans will appreciate this effort from TripleMurder.

With the idea of forming a band without musical boundaries or constrictions, TripleMurder has made it a point to breathe new musical life into the metal scene. Triple Murder is here to make listeners question what they think about pigeonholing bands into sub-genres, offering everything from chunky groovy riffs, blast beats, to breakdowns and two-steps and everything in between. With lyrical themes involving the state of the human race, politics and social media scares to just everyday life and human interactions, TripleMurder brings an in-your-face live show to the stage in a brilliant display of headbanging, jumping, power stomping, running and tons of other antics! Their first EP ‘Pre-Meditated’ from TripleMurder is set to be released fall 2019, with more material in the works!