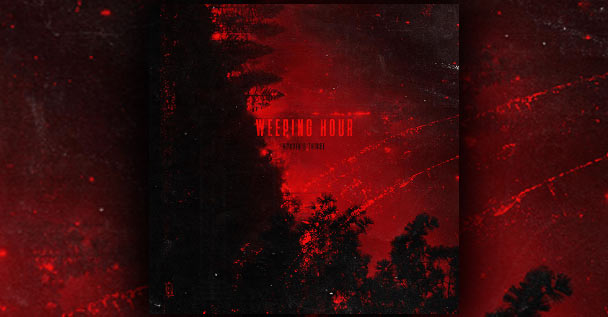 Weeping Hour is a new band to keep tabs on. Rising up like Summer heatwaves from the southern reaches of West Monroe, Louisiana, this five-man music machine crafts a heavy hitting take on Progressive Metalcore with elements of Mathcore and even Orchestral music mixed in.

This shows in full through their debut full-length album “Hunger & Thirst” which just hit the world mere weeks ago. It brings together 8 tracks of differing varieties to make up a 30+ minute run-time for listeners to enjoy.

If you wish to sample the wares for yourself, you may do so by checking out the streams provided across this page. The music has also been made available on most major online music platforms. In fact, the record rose to the #10 spot on the iTunes metal charts following its recent release. It’s also available on platforms like Spotify, Amazon, Google Play and more! Physical copies and merch are also available on the band’s official website. All proceeds go towards helping the band get on the road for some well-deserved touring.

However, I digress. Back to the review… Upon listening to an album like “Hunger & Thirst”, it immediately becomes clear that Weeping Hour’s intention is to craft an overall experience to fill the cracks in the minds of unsuspecting listeners. Do they succeed in this? Let’s dig in further to find out…

“Hunger & Thirst”, much like its title, can essentially be broken into 2 parts. These are quite literally separated by an intermission. That being the case, it comes across with a calm before the storm with the “In Medias Res” intro followed by 2 pummeling tracks in “Weeping Hour” and “A Rumor of Wisdom”. Then the interlude (once again, intermission, if you will) “Winter’s Hymn” serves as a palette cleanser before the record stomps listeners once again with the single “Foreign Flame”, “In Hunger and Thirst”, and the other single “Outlier”. “Woe to Those at Ease” plays off the lyrics from “Outlier” while simultaneously bringing listeners out of the record with orchestral flair.

Speaking of the orchestration… In a number of ways, this is the most cinematic album of its kind I’ve heard in a while. From the introduction through the interlude and into the closer, several orchestral arrangements have been added to the record. These are among the high points in my opinion as the swells of strings and arrangements bring a beautiful presence among the chaos of the band’s heavier self. The “Winter’s Hymn” interlude was probably my favorite among these and got quite a few replays because it felt like a proper part of a movie soundtrack (more specifically, it somewhat reminded me of Hans Zimmer’s “Time” on the Inception soundtrack).

Now, back to the flow of this record… something that struck me about the heavier numbers in the 2 parts is that they almost grow with intensity. For example, “A Rumor of Wisdom” arguably goes for the throat with its Mathcore elements as a counterbalance to the more melodic elements of “Weeping Hour”. That’s not to say both tracks aren’t very heavy… because they are. It just seems to turn up to 11 at a point. I’d argue the same with “Foreign Flame” and “In Hunger and Thirst” but things actually de-escalate a bit with “Outlier” before hitting the outro track in “Woe to Those at Ease”.

Instrumentally, this band is very damn tight. Their approach to Progressive Metalcore comes along a razor’s edge in terms of technicality and delivery. As mentioned multiple times, there are also Mathcore elements sprinkled among the assault that Weeping Hour wages. Something I also appreciate about this band is that they aren’t just heavy for the sake of being heavy. Every moment seems to have calculation behind it as they play between the dynamics of sound. The orchestral and atmospheric elements only add to this effect when the band chooses to pull punches just before pummeling listeners with all their might.

Vocally, this is a very consistent record. There are high screams that seem to come across with different varieties of strain or pitch. There are low growls that, well, pummel the low end. And there is clean singing which actually comes across nicely. Lyrically, there seems to be a good amount of introspection and a sense of suffering behind this album. Multiple times, the vocalist cries to god with questions and a sense of hopelessness lost in a search for something better. Certain lyrics throughout the experience also stood out like “bias is an opiate” and “no amount of self-indulgence is enough to feed your shallow soul”. Furthermore, the lyrics seem to form a greater concept across the record as a whole, flowing in thought from track to track (and even some of the titles).

One of the downsides to this album is that it seems to pass too quickly. It does clock in at 31 minutes which is on the shorter side for a metal full-length. But when you consider the orchestral arrangements placed throughout the record, there are really only 5 metal tracks present. So, in a way, this is closer to an EP outing from Weeping Hour with some nice padding placed to bolster the run-time. That’s not to say it’s lacking in quality on any front – it just seems to come and go quickly. If anything, the fact that it left me wanting more can be considered a positive for these guys.

The production across this release is absolutely solid. The final product brings a very crispy sound all around. And, for that reason, it should also be noted that the album was recorded by Jonathan Dolese from Konkrete Studios. The band had the following to say of this, “We love working with him and feel he deserves recognition for his work on this album.”

So, when push comes to shove, do Weeping Hour successfully bring about a coherent listening experience? I’d say yes. There’s generally a good flow to this record despite some jarring moments (the transition from “Winter’s Hymn” to “Foreign Flame” for example). It bolsters an overall concept and you can tell all the tracks belong together despite the difference in dynamics at times.

In the end, I’d say this is a good – even a great – introduction from the band as they forge into their musical career as Weeping Hour. If you enjoy heavy music of the Mathcore / Metalcore variety, this will likely be right up your alley. I’m feeling somewhere between a 7.5 to an 8 out of 10 on this thing so let’s round it up!

Once again, you can experience these tracks from Weeping Hour via the streams provided across this page. If you wish to add “Hunger & Thirst” as a means to sate your music collection, the album is available on most major online music platforms. This includes iTunes, Spotify, Amazon, Google Play and the band’s Official Website.