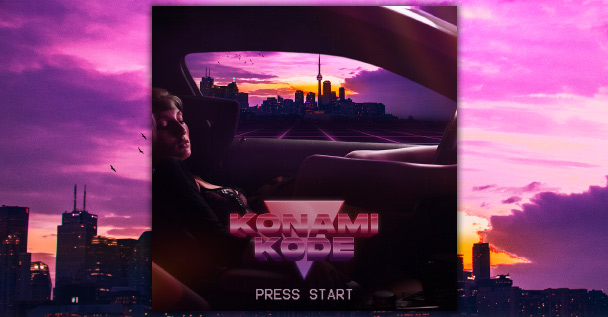 I hope you brought a fistful of quarters with you…

Not to be confused with the cheat code or the popular game developers, Konami Kode is a new force in the musical landscape combining the crunch of modern metal with electronic elements and a videogame inspired theme to back it all up (both in the visual and sonic realms). This arguably makes for an approach that sets them aside from several other bands in the field while simaltaneously maintaining the elements that keep them grounded in the genre to begin with.

This all comes together for the first Konami Kode product, going by the name of “Press Start”. The new output is an independent EP release that’s been making the rounds of late. It’s a powerful set of 5 tracks clocking in at 18-minutes’ worth of quality distortion to pummel and soothe the senses.

The record is currently available for streaming and purchase across most major online music retailers. This includes, but is not limited to, Spotify, Apple Music, Bandcamp, and Amazon Music.

The construction of this EP came about as the result of the following handful of individuals… Matt Bernal (also the primary songwriter of The Lucid Archetype – CLICK HERE to listen) and Jacob Elliott both handle songwriting duties with Matt also handling guitar and engineering while Jacob delivers vocals and drum writing. Additional credits come in the form of Simon Pettiford who helped write the intro track and Jordan Henderson with assistance writing drums on the single “Dreams Of The Fayth”. Their combined efforts made the EP into the reality it is today.

This all leads up to the most important question surrounding “Press Start”… How’s the gameplay?

Well, let’s cut to the chase… I’d say it’s good! The energy fluctuates from the high end to the serene, the effort is present from all parties, the sound is fun with a good bit of variety to go around, and the theme largely hits home. When you add up all the factors, it’s a good time!

For some relatability, Konami Kode has things in common with bands like (recent) Veil of Maya and maybe even names like TesseracT and Sleep Token at times. While they’re by no means the same as those bands, there are similarities that may draw a few of you in for starters.

As mentioned, there’s a defined videogame atmosphere shrouded over this record (for the nerds!). The music can be heavily quantized at times, but it seems to fit like a glove with the pixelated theme around the shoulders of this EP.

This theme is apparent from the very beginning with the intro track… which is also the title track… which also serves as a very nice warm up to the record both thematically and sonically! Electronic soundscapes sweep in and build as if preparing for an actual videogame session. Then an appropriate vocal sample is dropped and you know it’s time to play the game… That’s when the tight impact of the heaviness hits! This reminds me of the awesome effect that many modern metal intros have had in the past 10 years or so and it’s nice to see this tradition carried on as an effective opener for Konami Kode on “Press Start”.

This leads into the EP’s first single “Ice Arrows” which brings things full circle with vocals + more added into the mix. It effectively carries on the band’s introduction by showing some more variety and giving a glimpse at what Konami Kode is capable of pulling off as a whole. This exhibition of dynamics is pushed much further on “Estus Flask” which is undoubtedly the EP’s calmest number (and also partially the reason for those earlier TesseracT / Sleep Token parallels). The second single “Dreams of the Fayth” is probably my favorite track on the whole project. It allows all the band’s best elements to breathe in an entertaining display of their songwriting abilities. This leads into the final “Big Boss” which is a rather nice switch from the rest of the EP in terms of the band’s approach and, ultimately, an effective closer. It ends with a little distorted vocal easter egg that I’ve struggled to decipher but kind of sounds like the “Big Boss” kicking the bucket at the game’s end.

The instrumentation across “Press Start” comes across nicely. The delivery is consistently tight and there are plenty of interesting ideas and melodies to go around. This comes across through varying dynamics from heavy hitting breakdowns up to nice, soothing melodic compositions. Especially on a first listen, one never quite knows what will come next from Konami Kode. Variety is the spice of life and apparently it adds spice to the music here as well.

Unfortunately, I’m not always a fan of the clean vocals. At times, they do sound good, but they can also veer off center. They’re best when harmonized, reverbed, or manipulated with effects that mirror the electronic video game theme present on the EP. However, they can also come off dry, exposed, and off pitch which is a bit grating at times. On the other hand, the harsh vocals come across nicely. While not being too different from most Metalcore-type fare, there’s a definite force behind them that impacts effectively alongside the heavier moments on “Press Start”.

As for further criticism… While most of this EP comes off clean, there are moments that do seem somewhat sour and out of tune. Despite being one of my favorites, the 2:10 mark of “Dreams of the Fayth” is one example of this. Furthermore, I’m not much of a lyric guy when it comes to heavier music, but there were moments here that seemed a bit corny to me – for example, “Ice Arrows”. Beyond that, “Press Start” suffers from the problem that plagues all entertaining EPs… it feels too short. However, that’s a good problem for the band to have.

On that note, one of my favorite things about Konami Kode is the level of energy they’re capable of bringing in conjunction with the music. Sure, it’s calm at times but it can also really turn things up to 11 without warning! For that reason, it’s easy to imagine this band’s work going over well in a live setting. The energy comes exploding out from the very beginning with “Press Start” and it’s nice to see it translate through the record’s duration.

Now that we’ve played through to the end of this game, let’s reflect on how Konami Kode’s “Press Start” EP adds up. As I said earlier, this is a good EP that I can easily see a number of you enjoying (in fact, I know a number of you already have!). For a debut, there’s a lot to appreciate about this record and its new place within the modern metal landscape. In the end, this is a solid effort from a new band with some unfortunate shortcomings that hold it back from greatness. But it’s enjoyable nonetheless! I’m feeling a 7 out of 10 for the “Press Start” EP.

All that being said, I think Konami Kode may be a ticking time bomb of a new band that’s worth keeping tabs on moving into the future! There’s a good bit of potential here and it should be interesting to what these musicians ultimately do with it moving forward. If you want to observe directly, Konami Kode currently have a few bases set up across social networks. This includes the major stops like Facebook, Instagram, and Twitter. Go show them some love!

Once again, the new EP is currently available for streaming and purchase on most major online music platforms. Here are some links you can look through – Spotify, Apple Music, Bandcamp, and Amazon Music. Go forth and enjoy the music!