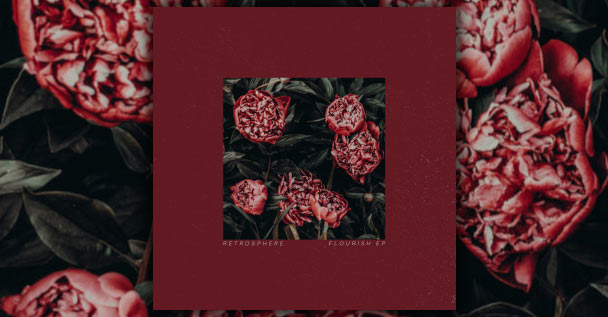 Look who’s back! Retrosphere are arguably among the upper echelons when it comes to pure potential in the instrumental Progressive Metal / Rock circuit. They’ve been playing high end tunes together since AP Music Theory class in high school and have released 3 quality records since.

Clearly not ones to rest on their laurels, Retrosphere have released an all new EP! It goes by the name of “Flourish” which actually fits the sound (and evolution of the band) quite well. This follows up last year’s full-length album release “In Motion” (CLICK HERE to read our review) in a brilliant display of Instrumental Progressive Metal / Rock wizardry that I’m sure a number of you will enjoy.

The new EP sits at a 26-minute runtime between its 6 tracks. It was released independently last month. If you wish to give the record a listen firsthand, streaming options can be found across this page. “Flourish” is also notably available on most major online music platforms. This includes the likes of Spotify, Bandcamp, Apple Music, Amazon, Deezer and beyond.

With all that being said, let’s dig in further and see if the new record truly does Flourish…

First and foremost, there have been some notable changes since the band’s last album cycle. While Byron Hernandez and Seamus McDaniel are still the two headed dragon fronting Retrosphere with their explosively melodic guitar work, there are some new faces… They brought on Matt Stevens to handle drums and, following the release of “Flourish”, added an official bassist in Jorge “Dino” Andino. This has bolstered their live presence and pushed the band in new ways which appear to be reflecting positively.

In preparation for this review, I re-listened to some of Retrosphere’s previous output – specifically, I gave “In Motion” another spin from front to back. This turned out to be a good move because it’s clear that Retrosphere have taken great strides for growth in their sound between the two projects.

“Flourish” exhibits a cleaner, more modernized, and matured version of the band and shows direct improvement in just about every way. Like I hinted in the second paragraph, this new EP is essentially a great big growth spurt for Retrosphere! Any and all issues I had with their previous record have been corrected in kind. These musicians really aren’t messing around with their craft and it shows. In fact, something I’ve always respected about Retrosphere is their hunger to get better as a largely DIY band. That’s exactly what they did, and my ears are here for it!

The EP starts with a splash of musical color with the track “One Light” which serves as an excellent introduction to the riff heavy, melodic alchemy that occurs on this record. This band always knew how to bring solid intro tracks, and this is no exception. It shows many of Retrosphere’s best angles without giving away the full picture.

The following tracks “Source Code” and “Petals” naturally progress from the point of entry while taking some slightly different paths in terms of feeling and dynamics.

The single “FTD” is a notable pitch shift on the record as things get significantly heavier. I remember listening to “Flourish” for the first time and having to check that it was, in fact, the same EP playing. That’s not meant in a bad way – if anything they chose a good point in the record’s track listing to give listener’s a good kick to the chest!

This is followed by an interlude “Drift”. It beautifully leads into the closing track “Zero Gravity” which serves as an excellent close to the experience while also being the longest addition to the “Flourish” line-up.

Every track on this record feels right at home despite any differences in approach (I’m looking at you “FTD”). They all flow well together and the transition between “Drift” and “Zero Gravity” is just a treat for the ears. If I were to make any sort of recommendation to Retrosphere moving forward, it would be to explore more fluid transitions like that to directly glue the tracks together and make the whole experience just a tad more cohesive beyond the sound itself.

There’s not a single riff I don’t like on this record. Retrosphere have returned with complete attention to detail once again. Every moment is carefully considered in their composition and it shines beautifully here on the other side!

When it comes to production, there has been a considerable overhaul here. The band opted to work with Scott Seigel for production and mastering duties and the results are crispy.

In terms of criticism… I don’t have much to say. As previously stated, Retrosphere have effectively reversed their flaws from “In Motion”. At worst, some may write Retrosphere off as Intervals worship (they are incredibly similar) but I think that’d be disingenuous given the strides this band has made musically and professionally. It just sounds damn good. I even have a positive, subjective opinion from my non-metal / prog / instrumental listening significant other who heard me working on the review. She said something to the effect of, “I really like the music. Wish it had singing.” The lack of singing doesn’t bother me at all but that’s essentially high praise coming from a whole other type of listener. Retrosphere is out here building musical bridges!

On another note, “Flourish” has been great music for productivity. Throw some Retrosphere on while trying to get work done and it helps any hardship breeze by. I personally love some great instrumental music (or high-octane Death Metal) while getting stuff done.

In conclusion, this is a great new EP from Retrosphere. It’s tasteful. It’s impressive. It’s more or less what I want out of a modernized instrumental Progressive Metal / Rock record. With that being said, I’m feeling somewhere between an 8.5 and a 9 for “Flourish” which means we’re rounding up! If you consider yourself to be a fan of prog, give these fellows a spin at your earliest convenience.

Once again, if you want to give the new EP a spin for yourself, you can find streaming links across this page. The music can also be purchased / streamed via Spotify, Bandcamp, Apple Music, Amazon, and Deezer among others.

If you find yourself enjoying the music, be sure to give Retrosphere a follow on social media! They’re currently active on just about everything from the looks of it. This includes the likes of Facebook, Instagram, Twitter, and YouTube. They’re even on Snapchat. You can dig in further (and find even more links) by visiting the band’s official website where they also have an official bio + much more.

And with that, I wish continued flourishing to the talents in Retrosphere! Should be interesting to see what may come next. Hope you all enjoy the music as much as I did!