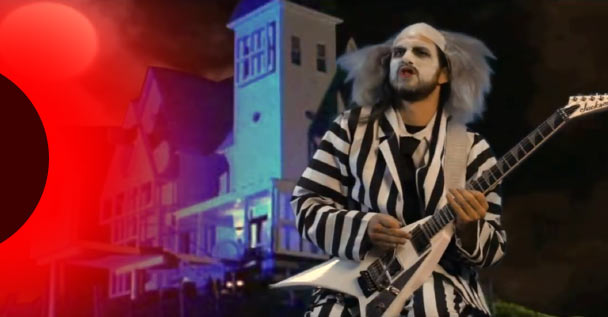 Death / Thrash band Exmortus have launched a cover for the “Beetlejuice” theme. Here’s the official word in support of this:

As the Oct. 25 release of their new Halloween/horror-themed EP, Legions Of The Undead draws closer, the Los Angeles-based death/thrash/shred quartet Exmortus has unveiled a play-through-style music video for their cover of Danny Elfman’s Beetlejuice theme. The clip sees the group’s members dress up as the title character of Tim Burton’s iconic 1988 fantasy/horror/comedy film.

Check out the “Beetlejuice” video at this location:

“I’ve been meaning to cover this for a while now,” says Exmortus guitarist/vocalist Jadran “Conan” Gonzalez. “As a kid, I loved the movie and the cartoon series that followed it. Danny Elfman’s music really does lend itself to metal orchestration, so this was a breeze to learn and jam out. Hope you have as much fun watching it as we did recording it. It’s showtime!”

“Beetlejuice” can now be streamed on Spotify, Apple Music, Bandcamp and other digital platforms.