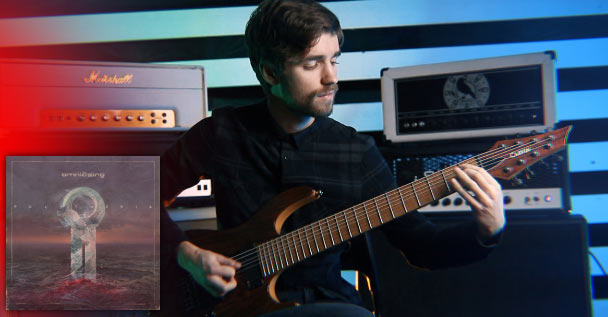 An unlikely player has stepped to the plate from Minsk, Belarus. He is the OMNIBEING and his music is one with all. This is a project powered by the mind of artist Vitaly Shemetovets that reaches well above and beyond the boundaries of one man. A considerable number of musicians have been involved with this project and it’s only just the beginning… More on that in a little bit!

Ultimately, this all comes together in a sweet instrumental Progressive Metal / Rock package that is both impressive and modernized in its approach. That package goes by the name of “Polytheria”. This translates through 45+ minutes of content over a 7-track spread that makes up the record.

You can give a listen to the goods right here, right now through the streaming options available on this page. Likewise, “Polytheria” is now available on most major online music platforms. This includes the likes of Bandcamp, Spotify, Amazon, Apple Music and more!

Now that we have the introductions out of the way, let’s dig into the mind and music of OMNIBEING!

As hinted earlier, one of the key features of “Polytheria” is the sheer amount of high-quality features lining these tracks. Probably most noteworthy among them is Last Chance To Reason drummer Evan Sammons who actually handles the percussion duties across the entire record! We’ll dig into more of the guest spots as this review progresses.

From the outset, this album promises to provide listeners with a sonic adventure through peaks and valleys of sound. While the waves of music seem to be heading in a general current with this record, it does stream into varying approaches to keep listeners on their toes. The record also has a nice continuity with differing tracks syncing up thematically.

Speaking on the theme, while looking at the OMNIBEING Bandcamp page, there’s a description from the artist himself that more or less hits the nail on the head. The sounds are inspired by science fiction and the retro delights of the 80s. These are both clearly present in the product that is “Polytheria”. He cites Solaris as a primary source of inspiration for the project which is awesome to say the least.

The record opens through waves of atmosphere lapping up against the shores of new ears. Through the introductory “Entelechy”, featuring Vladimir Krupnov, synths combine and swell to build the anticipation of the journey to come…

And they come in the form of the first full track “Aura” which features no less than Dan James Griffin who’s just a notoriously great guitar player. This track zips up and down in dynamic range while bringing about several quality ideas. In conjunction with “Entelechy”, it effectively makes for a nice introduction to the album by giving listeners a well-rounded idea of the OMNIBEING approach without showing the full hand.

This is followed by “Prism” which packs a bit of a punch at the start before going through an arrangement of interesting chord progressions and leads. This effectively shows another side to OMNIBEING early on while still managing to keep one foot planted where it had been previously. It’s also notable that this is the first track on a record full of collabos where Vitaly fully shines on his own (apart from Evan, of course).

“Meteor” features no less than Poh Hock of the Native Construct rank and file. It also made for an absolutely solid single in anticipation of this record. You can see why through the video playthrough provided right here:

Appropriately enough, the track “Vortex” creates the illusion of an actual musical vortex with a solid compositional approach. It also features no less than Wes Thraikill and made for one of my favorite numbers on “Polytheria”.

The title track itself begins with a bit of an electronic + guitar swing which gradually evolves into some truly beautiful melodic weaving. That is merely the beginning. This track is nearly 11-minutes worth of wonderful material worth digging through – in fact, you should just listen to this whole EP if prog music happens to be your cuppa tea!

“Azure” marks down the end of this record and, in my ears, might be one of the record’s more experimental cuts. There’s plenty of swirling dissonance and interesting use of counterpoint in this out-of-the-box closer. It also features a spot from Cameron Allen. And, much in how the record begins, it ends in waves of atmosphere to ease listeners out of the experience. All in all, it functions as a wonderful period on the end of this particular musical sentence.

I’d say there’s both a variety and a uniformity to the track listing across “Polytheria”. These musical slices largely fall within the same modern instrumental prog-type vein but they’re also not afraid to step away into some passages of experimentation. It makes the run-time of this record simultaneously uniform and a lush experience for the ears. It also helps things from growing stagnant.

Now, onto the critical part of this review process… At worst, I’d say some of the music wears its influence on the sleeve and therefore may not seem the most original in the realm of prog. However, this is usually made up for tenfold in a few other ways. Other than that, not much to say here. This record shines quite brightly and manages to stay above water.

In terms of sheer quality, the production behind this OMNIBEING debut is very well done. Every instrument or element has its given place within the mix and it all comes through nicely. Hats off to Alex Sedin (Ghostalgy Prods) who handled the mix and master here.

To sum it all up, “Polytheria” is a fantastic introduction to the world of OMNIBEING. It’s a solid effort from head to toe and I’ve enjoyed living with it for the past month. In the end, I’m feeling somewhere between an 8 and a 9 out of 10 for this record. Great listen for the prog heads of this realm!

Once again, if you’d like to listen for yourself, the music can be found across this page. It can also be found on Bandcamp, Spotify, Amazon, Apple Music and more!

That’s all folks! Enjoy the tunes.