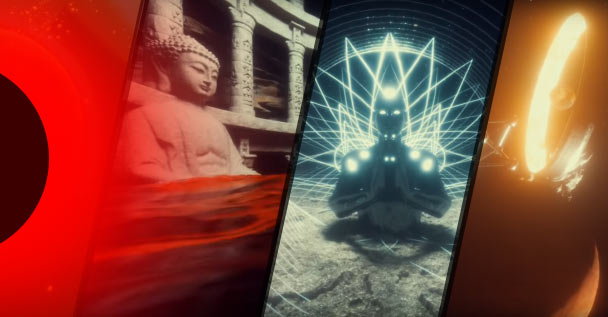 Blood Incantation just launched an absolute mind bender of a music video! This was done in support of their new album “Hidden History of the Human Race”. It will be launched on November 22nd via Century Media Records with pre-orders available to those who CLICK HERE.

The video itself was made for the new track “Inner Paths (to Outer Space)”. It was created by artist Miles Skarin and features a cross between outer space and ancient imagery with several interesting twists which appear to fit the theme of the album.

Here’s the official word in support:

Cosmic death metal band BLOOD INCANTATION have joined forces with Century Media Records to release the band’s much anticipated second studio album, “Hidden History of the Human Race”, outside of North America, Mexico and Canada. Dark Descent Records will be handling the American release and the album will be available worldwide on November 22nd, 2019.

BLOOD INCANTATION say the following about ‘Inner Paths (to Outer Space)’:
“’Inner Paths (to Outer Space)’ is a meditative journey through the inner cosmos of the human mind. We improvised this track on psychedelics over a period of several months, allowing it to grow and evolve as it chose. The atmosphere is meant to allow the listener time and space to explore their own thoughts and go on their own journey before the epic brutality of the album returns for the final track.”

The album will be released via Century Media Records as Limited Edition CD Digipak with green logo patch, Gatefold LP with 20 page booklet, lyric sheet, CD and poster as well as on all digital platforms.