NYXEM “Behind the Veil of Light” Album Review 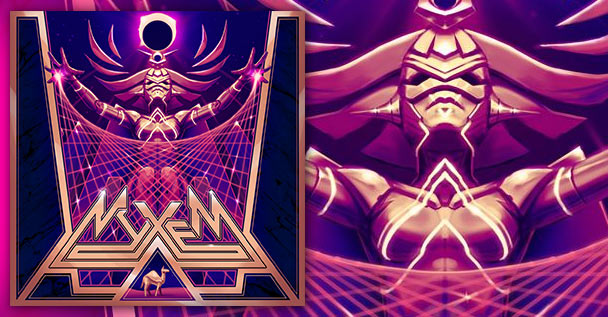 2020 has clearly not been a good year for bands. With many bands cancelling their tours and shows, their main source of money is from the sales they make on digital platforms such as Bandcamp, Spotify, and Apple Music. Needless to say, these platforms, especially Bandcamp, are trying their best to compensate their artists by waiving their fee. Following this announcement, artists earned as much as $7.1 Million on a single day. Understanding the depth of this contribution to the lives of independent artists, I thought of participating in this event by buying an album next Friday. But before I could make any purchase, I had to delve deeper into the Bandcamp’s shelf to find my pick!

It took me around 2 hours and 10 wishlists to finally arrive at the album I thought deserved a purchase next Friday! Nyxem is the brainchild of American musician, Jonah Hontos. A little background on Jonah, he started making music under the moniker of “Nyxem” in 2016. He introduced his unique take in Electronics by releasing his debut album “Decompiled” in 2019. Jonah is a “spiritual child” of Melodic metal, dark synthwave, Progressive Rock and video game music.

Jonah, however, was a bit different. He made the ultimate decision to compose Metal using a synthesiser. All of his compositions are based on it. He didn’t rely on a real guitar instead he used synthesizers and ran through high gain amp modelling software. In addition to that, he calls his style “Progressive Synth Metal”. Curious to know how it would sound, I went ahead and gave his latest album, “Behind the Veil of Light” a quick spin.

To give you a gist as to what you could expect from this album, it is very innovative and unique. Classifying Nyxem to a particular genre wouldn’t do justice to his composition. While his song has a strong Electronic influence, the Cinematic/Progressive/Goth Metal are prevalent throughout the album. For instance, the first song in the album, “Ra In Thy Rising” starts with a marching drum beat before throwing the listeners into something much more cinematic. While the melody and synth note drives the song forward, the drums mostly work behind the scenes giving the rest of the instruments a push. It is the drums that ease the transition, especially when the song moves from the melody hooks to a much more cinematic portion.

The drums, however, are sequenced. But the blast beats, double kicks and the occasional drum fill give the song a metal touch. Just when the song heads more into an EDM spectrum, Jonah brings his “Guitar”. This exemplifies an ideal and non-formulaic blend of Electronic music and Metal. Songs like “War Engine”, “Divine Madness” and “Abraxas” proves it. “War Engine” in specific has a lot going into that one might find it hard to differentiate the aspects. There’s a folkish segment in the middle of the song.

When it comes to the “Progressive” part in his style, the song “Trees of Eternity” would suffice to flaunt his proficiency. The song starts with something Electronic-ish before it quickly launches itself into something similar to Progressive Metal. That transition would definitely interest both Progressive Metal fans and EDM fans. It tells us that both of these genres can live under the same hut! Towards the end of this majestic album, the songs “The Secret Flame” and “In the name of Baphomet” reestablishes the Metal territory.

There’s a lot going into Jonah’s music. It is quite hard to pin in down through words. His melding of two diverse styles tells quite a lot about his creativity. Concretely, some of the positive things that I noticed on this album are Flawless production, wise integration of both styles, creativity, musicianship and songwriting. On the downside of this, is the repetitiveness. This is a personal opinion, but since I don’t listen to a lot of 7-minute trackers, listening through the long tracks on this album was a bit daunting. However, when I listened to the same set of songs while writing this review, I wasn’t bothered much. The melody kept me hooked! I will consider buying his music on Friday and will continue streaming it on Bandcamp and Spotify till then(once he releases it there). I surely recommend his music for all those who want versatility in their playlist.

That all being said, this album is perfect for those who want to explore the different side of Metal. “Behind the Veil of Light” is an innovative album which tries to put an end to the stagnant music industry. A perfect blend of Metal and Electronica that proves that this cordial amalgamation will sound relevant if it’s done right!