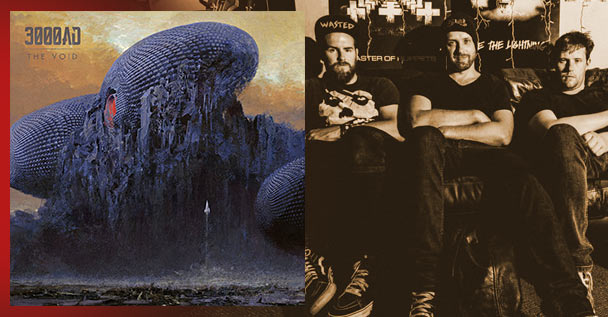 The sudden demise of the Power Trip vocalist, Riley Gale sent shock waves within the Metal Community. Not only did he push Powertrip to mainstream stardom using his signature vocal performance, but he is also an inspiration to all those up and coming Crossover, or Metal bands, in general. While bands such as DRI, Municipal Waste, Suicidal Tendencies, SOD and Nuclear Assault revolutionized the genre, the future of this genre hangs in balance with only fewer acts getting the attention they deserve. To clarify, I’m not saying that this genre is saturated, but I believe it is not as lauded compared to other genres. Personally, I prefer such Crossover acts over the traditional Thrash Metal acts. Hence it is sad to see not many finding limelight.

My quest to find gems within this spectrum led me to 3000AD, a Crossover Thrash Metal act based out of New Zealand. This trio released their debut album, “The Void” early this year. The album flaunts their unique take on Thrash Metal, as they try to fuse Punk with what they call as “Modern Thrash Metal”. But interestingly, their experimentation doesn’t end there. The band took it up a notch and added a few progressive elements which bring out the Sci-fi theme that they were looking for in this album. The album starts with “3000AD”, which sets the mood with a staple Thrash-y riff, backed by punky vocals from the lead singer and drummer, Hellmore Bones. Around 5 minutes in length, the track shows the snippets of each instrumental element of their band. My Music Lingo is poor but here’s my take on their instrumentation: While the drums drive the song forward, the guitar work helps in shifting gears as to which tempo the song has to flow. The bass too is not hidden in the background, which is a rare incident these days.

Although it is Hellmore Bones who takes charge on the vocals, both the bassist and the guitarist cover the backing vocals – a quintessential element for an angst-filled Crossover track. One thing that I would like them to try is a riff breakdown. Well, I’m pretty sure many would disagree, but the way they use war drums for build-up, and having that section end with literally nothing is hard to digest. After a couple of quality tracks, the one track that blew my mind was “The World We Knew”. Sitting at number 6 on the tracklist, this track is surely on the top of my list when it comes to the best tracks that I have heard this year. The reason being the catchy riffs and occasional crisp guitar solos. Easily one of the best tracks on the album – a song that might as well define who 3000 AD was, once the band hits the mainstream media.

By far we have only discussed the Thrash and Punk part of their sound. Beyond these elements, the band showcases their love for Progressive music, as said before, through “Who’s Watching”. Around 6 minutes, the track starts with a mellow intro that paves way for the riffs to begin. I believe the drums could be a bit more creative. Not that it is bland, but there could have been more fills and cymbal accenting than the drum rolls for the transition. Then again, it is very rare to see a drummer play around dozens of cymbal accents on a Thrash/Punk track.

While the album’s total running time is around 45 minutes, you wouldn’t even notice the time flying. Tracks are very engaging that you would get lost in the riffs and forget about the time. But still, there are some tracks wherein I would have cut short the running time. However, that too is for a couple of tracks. Overall, the positives do outweigh the negatives on this album. Plus, this is 3000 AD’s first album. So it would be ambitious to have them record an album that has 0 downfalls. In fact, I believe newer bands should try something different like what 3000AD did. Because even if the sound doesn’t work out for the band, at least they will know what not to do in the next album. This is what motivates them to change their tune. Generally, for any band, it would take at least a couple of albums to establish their standard style.

Surprisingly, in my opinion, the guys at 3000 AD have pulled it off in their first album itself. In the sense, the direction that they are taking right now matches the expectations that one would have while listening to the songs. However, there are some areas that I believe the band could have done better. For instance, the guitarist should be given some more time to solo, since we have clearly seen what he is capable of. In addition to that, the drummer could also add some new flavour to his parts. Like, having the war drums to actually pave the way to something angst-filled and filthy. Finally, if at all they are adamant about the inclusion of Prog elements, they should try something serious. Like how Cryptic Shift pulled off that blend throughout their discography. These are some of my thoughts. Then again, each member would have surely thought of these changes. Maybe the drummer stood with simplistic drum parts to not shadow the exquisite guitar work. Similarly, the guitarist would have thought of doing less solos as it would’ve changed their song structure.

That being said, “The Void” is an album that the Modern Thrash Metal community needs. A decent debut album such as this, calls for a solid and effortless sophomore. I believe it wouldn’t take long for these guys to release the next one, and most probably they will hit a homerun! Needless to say, I’m excited to see what they will bring to the table.