SIX FEET UNDER “Nightmares Of The Decomposed” Album Review 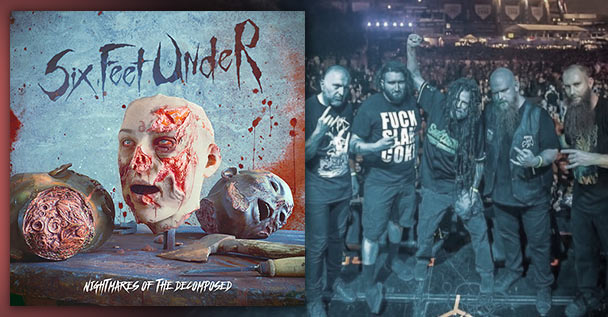 Background: Former Cannibal Corpse vocalist Chris Barnes started Six Feet Under in conjunction with Obituary guitarist Allen West back in ’93. West has since left the band and Barnes has since brought on a whole new cast of characters for the current line-up. To date, there have been 17 full-length albums from this Death Metal outfit – the latest of which is “Nightmares of the Decomposed” – released last week.

This Album Sounds Like: What the local church group thinks about when they hear the words “death metal”. That is to say, at worst, this sounds like a parody of a Death Metal album. Usually when I start listening to an album like this, I stop listening and find something else. But, for the sake of the review, here we are…

Some Favorite Tracks: “Amputator” was easily my favorite from the bunch but it went pretty far downhill from that point onward. A few brief moments of instrumental brightness do shine here and there.

Positives: There are lots of guitar solos present (every single track has one I do believe) and I enjoyed a few of the riffs. There was some decent drum work as well. For what it’s worth, the album cover was also a ahead (pun intended) of some others in the band’s discography… There are also moments of unexpected and unintentional comedy.

Negatives: “EEEEEE” – the voice of Chris Barnes has not aged well. I don’t know much about the man and I suppose I can respect him for doing what he loves but it just doesn’t sound good beyond the scope of a passion project at this point. The nature of this whole project appears to be phoned in with few exceptions. I have to admit certain parts made me laugh involuntarily. At best, this is just some meat and potatoes Death Metal.

In The End… This might honestly be the worst Death Metal record that I’ve sat through from front to back. As said before, I’d usually just stop listening but it’s review time… Too few moments of this record make for any type of appealing Death Metal content. For all of these reasons, I’m feeling a 3 out of 10 for Six Feet Under’s “Nightmares Of The Decomposed”. But who knows? You may love it. Feel free to listen to the band’s brand of brutality through any of the streams provided across this page.