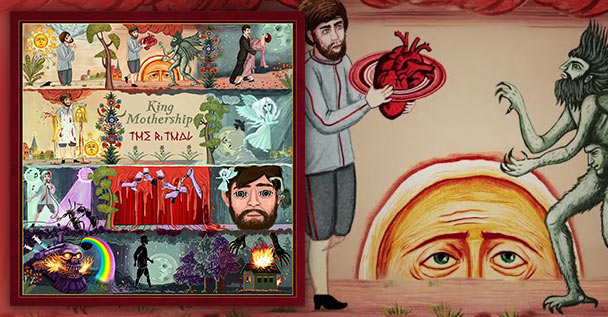 Background: Here’s a new band featuring Periphery vocalist Spencer Sotelo and drummer Matt Halpern along with former Slaves drummer Tai Wright playing bass. They’ve collided to make a rock oriented project called King Mothership. Under this moniker, they just launched an all new album by the name of “The Ritual” via Periphery’s own label 3DOT Recordings. Does this mothership sink or swim? Let’s see…

This Album Sounds Like: Selling one’s soul to the devil while you’re both dressed in drag. This is a flamboyant pop rock opera fever dream running somewhere over 100 degrees. It’s a series of infectious hooks just waiting to catch some ears out of the ocean. If you expect to like this album purely on the merit of enjoying Periphery as a band, your expectations will likely be dashed. If you approach it with an open mind, you may find something to enjoy upon the mothership.

Some Favorite Tracks: “Death Machine” was probably my favorite track on the whole record with its infectious groove and tight musicianship. My other favorite would easily be the closer “I Stand Alone” with a feature from no less than guitarist Plini. Numbers like “The Devil’s Train” and “Cosmic Meltdown” also stood out for a multitude of reasons.

Positives: Matt’s drumming is consistently exceptional as per usual and Spencer has several stand out vocal moments up top. There are a good variety of musical approaches to be found across this record and it’s generally quite catchy. I also enjoyed the fact that this is a concept album which brings about a story for listeners to follow along with.

Negatives: It’s a bit cheesy and over the top at times. Some of the VST instruments and electronic breaks were flimsy and could’ve translated much better into the final product. At worst, this album can sound a bit cheap at times.

In The End… It’s entirely probable that some of you will enjoy this album and some of you will hate it. I personally liked it more than not and believe it to be a pretty decent rock record at the end of the day. It certainly has flaws but it shines enough in other ways to be enjoyable as is. I’m feeling somewhere between a 6 and a 7 out of 10 for this record. So, let’s just make this a 6.5 and call it a day. If you want give King Mothership a listen, spin any of the given streaming links across this page or by CLICKING HERE.