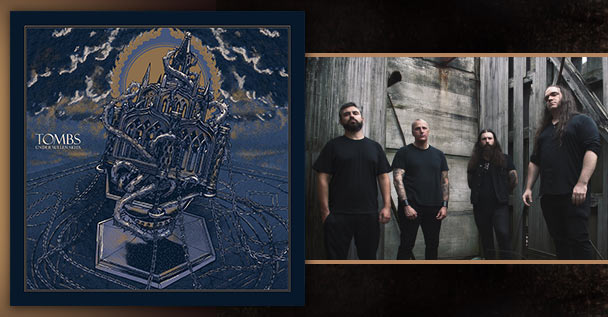 Background: Straight to you from Brooklyn & Jersey, TOMBS have been incredibly active since arriving in ’07. In that time, this band has released no less than five full-length albums and four EPs with some sort of music arriving just about every year. This year alone, they’ve released an EP, a live album and now a full-length album! It goes by the name of “Under Sullen Skies” and delivers another good pocket of the band’s Black / Post-Metal approach to extreme metal music. This is the band’s first full-length effort joined by drummer Justin Spaeth, guitarist Matt Medeiros and bassist Drew Murphy to join founding member Mike Hill. We’ll look to these Sullen Skies and see if it rains… It’s cloudy with a chance of metal out here!

This Album Sounds Like: Taking a step into the grave and hitting your headstone. This is a pummeling new effort from TOMBS. I haven’t personally driven to it, but it sounds like great music for a Black-ish road trip. This would probably leave a trail of flames behind the vehicle, causing random acts of arson all the way to your given destination… might even burn down a church as I hear that’s par for the course… BUT this record strays further from the band’s blackened origins with a wider palette including elements of sludge, hardcore, death, post-rock and more to round things out.

Some Favorite Tracks: “Bone Furance” opens things with a kick in the pants. “Lex Talionis” is a face melter amongst the bunch. “Secrets Of The Black Sun” was delightfully out of the box while providing a side step from the rest of the album. “Mordum” drags ears through miles of glass (in a good way). “Void Constellation” is just damn massive. Getting down to brass tacks, I generally enjoyed all these tracks.

Positives: This is a quality, eclectic extreme metal offering doing a number of things right from front to back. It doesn’t stay still, serving a wide variety of approaches into the listener’s ear. This is a very dark offering from the band. Appropriately so, there’s a bit of a lo-fi approach to the production but everything collides as it should. The new members appear to be well at home in this line-up as well.

Negatives: Drones on a bit at times, causing me to zone out – for example, “Angel of Darkness” had this effect on me though I could appreciate its overall dissonance. Though I enjoyed the album, I can’t say it floored me. For what it is, however, good job by TOMBS on the new record.

In The End… This is a really good, new offering from TOMBS as they continue on their trail of fire. “Under Sullen Skies” does indeed rain on us all. Ultimately, I believe this album deserves a 7 out of 10 as another good record under the band’s belt. If you wish to give a listen, the full stream is available on this page and should be available in the major music stores at midnight tonight! Support the band if you enjoy what you hear \m/