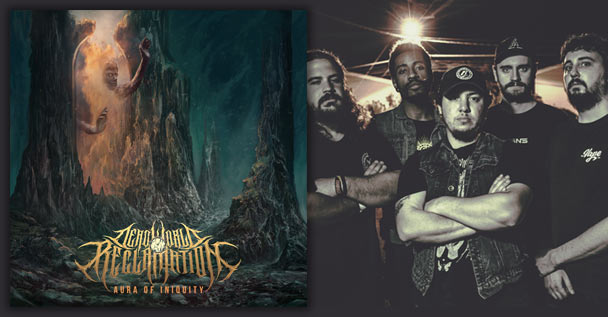 If you’re reading this, you made it through the dumpster fire that was 2020, and with any luck, you’re hoping that 2021 might be a somewhat better year. With each new year, we can at least count on the advent of new music and material from bands that are new to us that ends up making the days and weeks go by with greater ease. To that end, Tempe, Arizona-based technical melodic death metallers Dead World Reclamation and their upcoming sophomore album, Aura of Iniquity, should prove to be an exciting addition to the best death metal that will come out in 2021.

Dead World Reclamation – Aura of Iniquity is set for release on Friday, April 23rd. The cover art for Aura of Iniquity was expertly crafted by Mark Erskine (Symbolik, Fractal Generator) and the album was tracked, mixed, and mastered by Jeremy Davis of Metasonic Studios.

Active since 2017, the band has previously released their first album, Sentient, in October of 2017. Fast-forward to 2021, and Dead World Reclamation has grown into an entirely different beast ready to take over the world. Although still a melodic death metal band at heart, the group’s current form is greatly enhanced by technically inclined playing and orchestral layers paired with streamlined catchy songwriting. As always, they continue to stay true to their roots by infusing their complex take on melodic death metal with a metric ton of impenetrable heaviness and skull splintering brutality added in throughout Aura of Iniquity.

Dead World Reclamation – Aura of Iniquity will strongly appeal to fans of Wretched, The Black Dahlia Murder, The Faceless, Inferi, and Alterbeast.

Dead World Reclamation comments
“We’re five guys who love both Death Metal and a good story, therefore Aura of Iniquity is a series of short stories told in Death Metal format. Roaming through tales of dark bargains with otherworldly beings made for power untold, forests where gargantuan spiders dictate the law of the land, to necromancy told from the viewpoint of the body possessed. While our musical influences are definitely reflected in our songs, we tried to approach this album with the mindset of just creating music we’d love to listen to. We feel we’ve grown immensely since our first release, Sentient, and hope you all enjoy the album as much as we enjoyed creating it.”

Dead World Reclamation – Aura of Iniquity Tracklist
1. Ripped From The Grave
2. Embrace The Hive
3. The Everlasting Hunt
4. Pantheon of Shadows
5. Heralds of the Formless One
6. Arachnocratic Assemblage
7. Whispers of the Evergloom
8. The Void Bargain
9. Those Born of Suffering
10. Plaguemaster’s Legacy