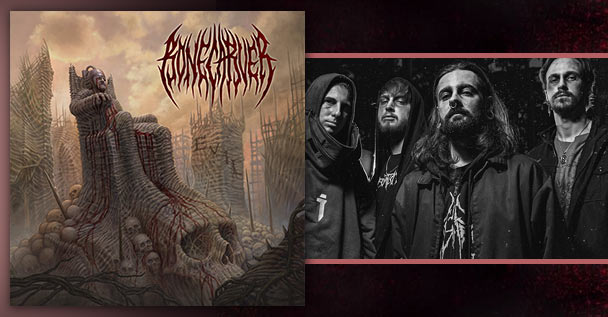 Background: Bonecarver are the remnants of former Spanish slam outfit Cannibal Grandpa, emerging from the depths with a new project and a debut album entitled Evil, released March 5th 2021 via Unique Leader Records.

This Album Sounds Like: A full-frontal assault lead by evil, down-tuned riffs, punishing breakdowns, pulverising drums, pig squeals, guttural growls and all the heaviness you could ask for, spread across its ten tracks. It’s not a “noise” album, while it can be classed as Slam, it establishes strong rhythm sections, each track being wildly different from the last but still possessing the underpinning style of the band.

Some Favorite Tracks: Opening track “Revolver” gets things off to a gloomy yet heavy start, the tempo is kicked up come to the second track “Overtorture” and by the time track three, “The Scythe”, hits its all-out war on your eardrums and it’s damn impressive. Everything is layered together well, there is no distracting competition from instruments vying for domination, it’s a clean and polished record that delivers it’s sound and the band’s intention well.

“Moon Maniac” hits a little different with an almost hardcore meets deathcore approach, it’s a welcome addition that grips the listener’s attention, demanding you pay just a little more attention to what Bonecarver have to offer.

“Nest Of Traitors” also goes some way to bucking the trend and feels a bit more like a death record track that anything from the slam/deathcore arena until it’s utterly filthy and earth-shattering breakdown that closes out the track.

Positives: There is a variety of tracks not often found on the harder side of metal, Bincarver didn’t want to just stick to one formula, whilst everything falls under one banner, their approach is tweaked for each track and it plays out well and remains tight and precise from start to finish.

Negatives: The tracklist could have been bulked out to maybe twelve tracks but I could be nit-picking, there are some areas where it felt like the drums could have been flashed out some more rather than being held back in places and one or two more rhythm lead sections would have really capped off what is already an impressive album.

In The End… Evil is a fun, heavy and damn well put together record, a strong debut from the re-incarnation fo Cannibal Grandpa. A show of power right out of the gate shows that this new iteration is serious about establishing its own legacy and taking extreme metal to a new level.