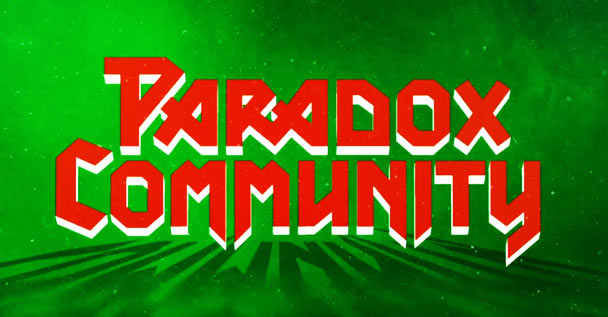 Metal music video in a style between Iron Maiden, Pantera, Metallica and Megadeth. From thrash metal over progressive metal elements to thrash metal, Paradox-Community is touching many metal genres. The band plays in power trio lineup featuring Mirko Mucha on vocals and guitar, Henk Humberg on Bass and drummer Thomas Plum. The song Northern Star is from the bands actual release “Omega” that will be released on 21st may 2021.

What is Paradox Community?

Paradox Community (PC) is a Metal Band from Germany. It was founded about 20 years ago by Mirko Mucha (guitar, vocals) and Thomas (Tommy) Plum (Drums). The band is active since then but mostly in their rehearsal room. Because both founding members have exhausting full time jobs they never focused on playing many gigs but over the years they played some gigs in smaller venues and were active in different projects. In year 2000 they recorded an Album that was never released officially because it was just for capturing the songs at this time before Tommy left Germany to work in the USA for some years. After his return and playing with different bass players Henk Humberg joined the band and this trio build Paradox-Community ever since 2007! Viewed from the outside you can call Paradox-Community a hobby band or a unknown underground project but on the other hand we all are making music nearly our whole life…

Mirko’s song writing and guitar playing is influenced by bands like Pantera, Megadeth, Testament, Metallica and many more 80s and 90s metal in the range of melodic, classic, thrash, progressive and a little bit death metal. Of cause he loves rock and hardrock music from bands like ACDC, Queen, Toto, and 80s pop music as well…and he tries to use unique riffs and ideas to build up songs that have good “core” ideas and something “extra” because absolute standard song structures become boring so fast. Most times he does not think about the style, genre and structure he is playing and combines everything he likes.
The guitar player:

Mirko started to learn guitar playing at the age of 10 on acoustic nylon string guitar. For about 5 years he took lessons from Helmut Richter a student of German acoustic guitar legend Siegfried Behrend before he started to focus on electric guitar. He was 16 as he got the fantastic idea of becoming a Rockstar but after practicing not enough, he was kicked from his first school band and replaced by a much better guitar player, motivating him to practice a little bit more in his future. Mostly he is focused on becoming a solid rhythm player but after listening to Marty Friedman, Alek Skolnick and Yngwie Malmsteen he loves to play some solos or weird melodies from time to time.

Mirko started singing in 1993 for some cover versions of Megadeth and Anthrax and to teach his song ideas to a female singer in his second band Hemlock. After he heard his first singing attempts recorded on tape, he nearly quit singing because he did not like his voice and missed the right pitch sometimes/often. After some practice with singing to Toto, Queensryche, Maiden etc. he improved his abilities but needed some more years to trust in his own voice. His role models for singing and shouting are Bruce Dickinson, Phil Anselmo, Jeff Scott Soto, Tony Martin, Jorn Lande, Dio and many more. For becoming better as performer and singer he joined the hardrock band Ride the Bullet in 2014 without playing guitar there. Most times he is a shouter, but he loves to combine hard shouting with cleaner vocal parts and all nonsense that comes to his mind!

Tommy started playing drums 1983 at the age of 17. He began with picking up ideas by ear from bands like Quit Riot, Van Halen, Bon Jovi etc. He played straight hard rock in his first years, joined the band Sovereign in 1984 and started to visit other local bands to learn and “steal” from older and more experienced drummers. From 1990 on he played in the Band called Big Brother that later turned to Riot Act in 1993. There he worked together with the really gifted guitar player Thorsten Praest and with singers like Michael Bormann (Jaded Heart), Olaf Kobbe (Solar Project) and Thomas Kroell and they produced a professional Music Videos for the songs Blaze of Love and Manic Wheels around 1993.

In 1994 he visited the drummers institute for a 10-week course where he learned theoretical background and insights in playing other styles like African rhythms or playing the “Rosanna Shuffle” correctly. At this time, he started to develop a more refined style with using ghost notes and a much bigger range of details in his playing without losing the sense for strong basic ideas that fit to the song. After Riot Act he played in different bands and he met Mirko in 1996 because they played in the same rehearsal bunker in Oberhausen. After they started playing together Tommy added some more hardness and modern metal elements in his drum playing and he took guitar and singing lessons and helped Mirko with back vocals on the album recorded in year 2000.

The special thing about Tommy is that he never stops to learn new things and always tries to implement new ideas, rhythms, techniques in new songs but at the same time tries to concentrate on supporting the riffs and the song itself. As Mirko says he seems to be a normal guy if you meet him first time but at his work as craftsman and behind his drumkit Tommy’s brain works on 200% combining everything he knows to new ideas. Give him an exercise for the snare and he will use it for a crazy bass drum pattern etc. In 2018 Tommy played some gigs for guitar wizard Jörg Brukschen’s Metal Inc. Lately he worked with Drummer Marc Küsters on more progressive stuff, weird ideas and things you should not use if you don’t play for Meshuggah.

Henk started playing bass in 2000 and joined different metal bands like “Turn to dust” till he finally joined PC in 2007. His music taste and own compositions are sometimes complex and using odd harmonics and strange rhythms. In 2010 he started his progressive project Summon and he released “Long Time in Captivity” in 2015.

You can say that he never goes the straight way in learning or writing music. He will never practice fast licks to show off, but he will construct his own scales or develop own music theory, use weird harmonics, and odd rhythms. In PC’s music he must combine Mirko’s riffs with Tommy’s independent drumming which is not easy every time. So, he is switching between metal like guitar backing, rock based bass drum pattern support and some melody extension.
Henk is a complete songwriter and delivers parts or songs for the Paradox music like main parts for Desire2 or the middle part of White Chapel which were harmonically much more complex than Mirko would write.

Henk is working as an independent guitar teacher since 2017.