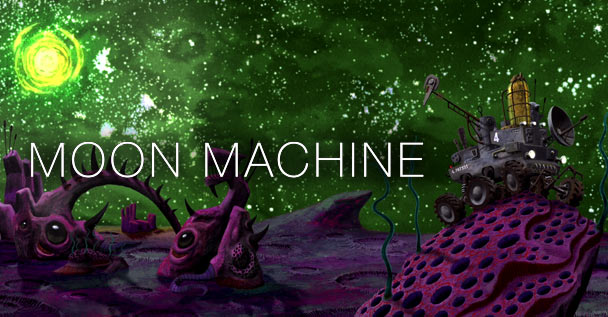 The modern era of progressive metal on the lighter end of things has thrived by fusing metal’s aggressive musical nature with a tempered prog-rock and sometimes post-metal feel all without feeling entirely like metal-lite. Within this new class of progressive metal, newcomers Moon Machine are eager to stake their claim.

Although it would be a bit of a reach to claim that the Massachusetts-based progressive metal/prog-rock faction in Moon Machine has things down to the degree currently praised prog-metal heroes do, the eclectic music on their self-titled debut album is not to be missed. The music on their upcoming self-titled album, out July 30th, stands out its own two feet. In a lot of ways, doing so by harkening back to an Opeth type approach to prog-metal without delivering a death metal sound per se. Alongside a self-cited side of inspiration from the likes of Devin Townsend, Alcest, Porcupine Tree, Anathema, and Tool among others.

“Spacey production, headbanging riffs, epic choruses, and acoustic sound palettes all find a home in this project, along with detailed pianos and keyboards, layered vocals, and progressive drumming. “We each brought in a lot of influences to our overall style, and it all came together in this unique, fun way,” says vocalist, guitarist, and bassist Eric Hochwald.

Moon Machine comments on the release of their self-titled album
“Though this album has fun and lighthearted moments, the musical and lyrical content often takes on darker and richer topics as well. Reckoning is about a war criminal, and the powerful, almost violent music melds perfectly with the themes. In the sprawling three-part closer, Post-Upgrade, a software update to an AI companion leads the lyrical main character to contemplate his relationship and place in the world. From beautifully composed and performed piano passages to intense crescendos, there is something for everyone to enjoy.”