KEEPING UP WITH THE MAIDENS – ACTION FIGURE INSPIRES CASH IN BONANZA

It’s been 30 years since Iron Maiden released their 5th studio album, Powerslave.  Can it really have been that long?  Yes it most certainly can.  And to mark this anniversary in style the lads from Maiden have released a brand new Action figure of their mascot Eddie.

This 10” tall replica of the Hellbeast comes fully wrapped in genuine mummification bandages and clasped in chains forged from steel; just in case you have to restrain the little rapscallion.

Hopefully he will become available at ‘2 minutes to midnight’ on the release date of the album but I assume he’ll be out as soon as possible.  To swell the coffers of their presumably dwindling bank accounts. 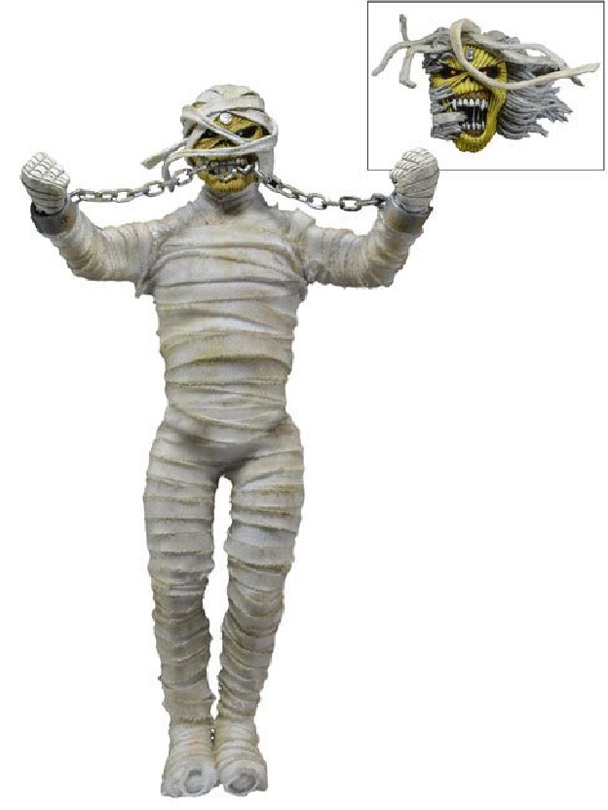 Maiden have always been a collector’s dream of a band.  With a wide and varied collection of merch for fans to obtain and fantasise about owning.  Most other bands it seems quite content to limit themselves to clothing, recordings and the occasional signature plectrum or drum stick.

But the word about Eddie-Mummy must have broken through the normally impenetrable wall of silence that surrounds Maiden and has caused a great wave of merch inspiration to surge through the metal community.

A lot of what follows is unconfirmed but if my sources are to be believed then we are in for the greatest period in Metal collectibles since Kiss stopped making lunch-boxes.

Not one to shy away from an unusual opportunity, Maynard recently invested a lot of his hard sung money into a Southern Californian Vineyard.  After this started paying off, the rest of the band became a little jealous of MJK’s entrepreneurial success and petitioned management to expand the range of TooLectibles.

The first product hot out of the workshop is shamelessly pandering to US car culture with a set of engraved torque wrenches.  Each one bearing the name of a different TooL classic.  This is certainly an item that will tighten the nuts of every metal loving gear-head.

But never one to miss a trick and displaying his dominance over the rest of the band, each purchase comes with a Maynard James Keyring. 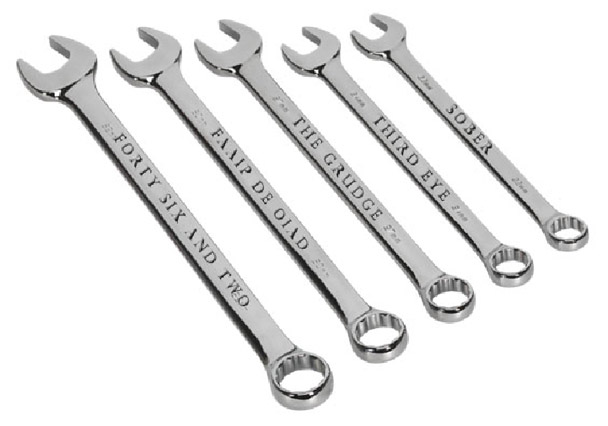 Following a rumour filled couple of months culminating with Malcolm Young taking a break due to ill health, AC/DC wanted to prove to the world that they are still very much a going concern.  Full of the irresistible electricity and live wire spirit that made them such a huge world-wide attraction.

Their foray into the world of unusual merch begins where you might expect; in the world of high voltage.  They hope to reveal next year a set of shocking, yet fully insulated plugs.  So that every true fan can refit their appliances with connectors bearing the bands logo and covers of their classic albums.

Don’t know about you, but as far as ideas go, I think this is TNT Dynamite!

Everyone thought that with the departure of Tom G Warrior, we had heard the last of these Swiss boys.  But no, they too are back from ‘Beyond the North Winds’ showing their softer and more child friendly side.  In collaboration with Hasbro; they present to you, out in time for Christmas: Celtic Mr. Frosty 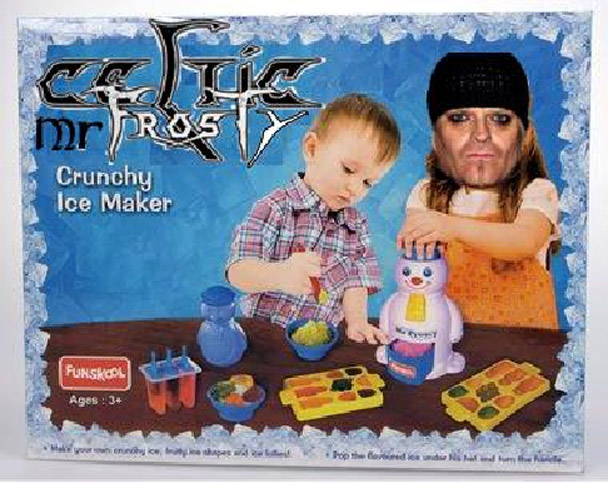 Shave that Ice, grind and slice, then add some blood to make it more nice.   Instead of a plastic penguin containing raspberry sauce, each box will contain a real dead penguin with artificially sweetened blood.

It’s a bold step, but let’s with them well with it.  Good luck Guys!

Sabbath are hardly short a Dollar-Pound or 2 these days.  With their sell out tours and best-selling albums, the bank manager is always buoyant. However, sometimes collectibles emerge that aren’t just cynical schemes to rake in the cash.

Occasionally they simply exist to fill a void of cuteness, of tactility, of pure, hair-stroking cuddliness.  And on this front Sabbath have put forward their most loveable member.  Soon hopefully available to the general public.  For the first time, in equine form.  My Little Tony……Iommi! 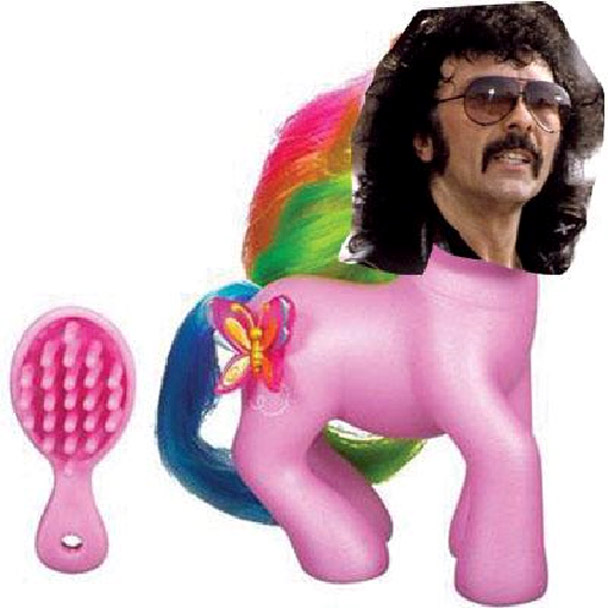 Each doll comes with a brush made from barbed wire and spikes, a scold’s bridal and plays the intro to Iron Man every time you comb his hair.  Evil has never been so loveable.  Something that no true fan should ever be without!!

I bet you thought he was serious and deep.  That he had incredible artistic integrity and would never lower himself to endorsing non-music products.  But being in 2 of the big 4 yet never quite receiving his due rewards could have broken Dave Mustaine’s principles.

Sources suggest that, in the next year he could become a titan of Branded sub-licencing.  Venturing boldly, just like his music, into areas that others dare not tread.

His love affair with urban travel in Europe is made flesh with the first in a series of travel guides: Dave Mustaine’s Capital of Spain! 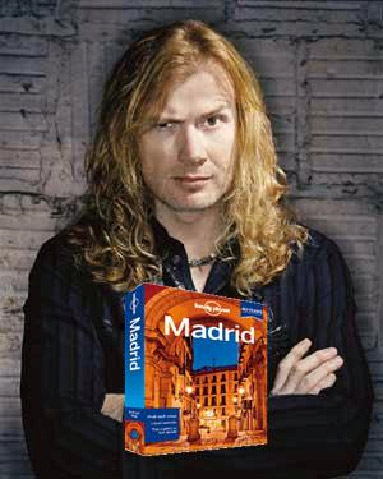 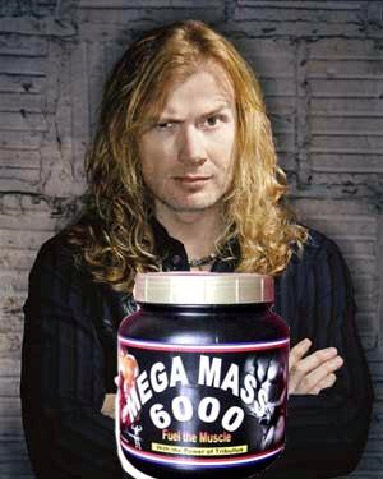 Dave has long been fascinated with magic and being a fret-board magician himself is probably the best man to write the definitive biography of the world’s most famous conjurer.  It’s coming out soon and you’ll be able to discover the inner workings of genius in: Dave Mustaine on David Blaine! 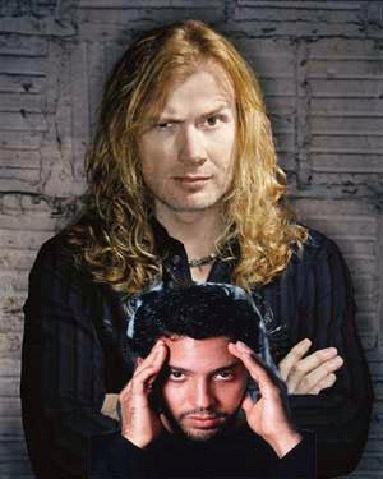 His amazing hair has long been envied by men all around the world.  His beautiful locks blowing gloriously in the wind as he solos like only he can.  But now you can have the hair if not the talent by using every product in Dave Mustaine’s Luscious Mane!

Shampoo, conditioner, toner and frizz ease.  It’s all there; stick it on your hair! 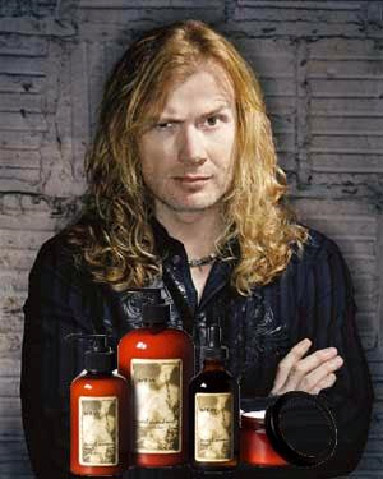 And finally…….The man from MegaDeth wants to help the Mega Deaf with his own line of hearing aids specifically designed for listening to music.  Do you have an elderly relative who would benefit from Dave Mustaine’s Hear Again?  We all do, so pass this message onto them.

Unfortunately no graphic was available for this.

With record sales never likely to pick up to their mid-90’s peak; alimony and child support climbing ever upwards and bank balances becoming stagnant, we can only look forward to more of these money spinning moments of pure inspiration.

For after all, who needs music, when you’ve got stuff?!

*Some or all of these items may never exist.