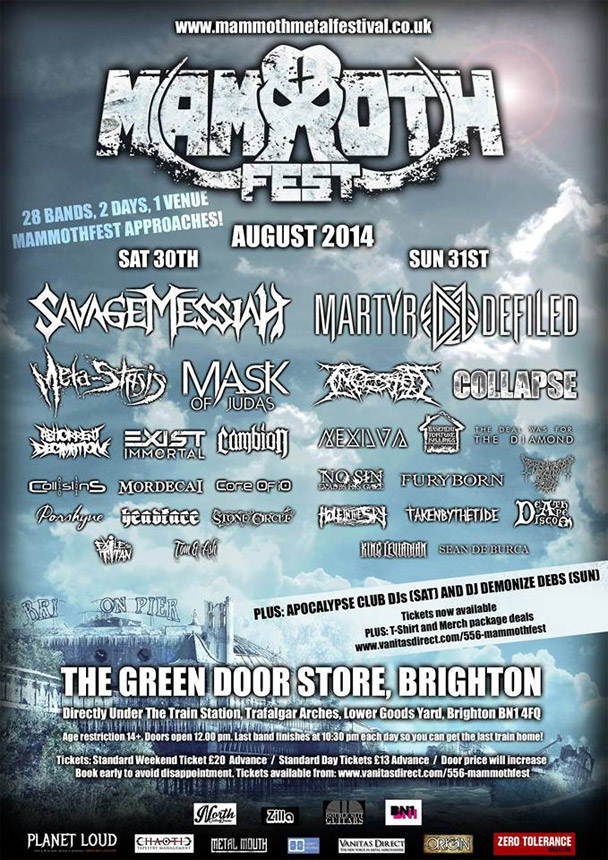 The UK is currently a HotBed for independent festivals, with events of all shapes and sizes thriving across the country. One upcoming multi-day show is the resurgent MammothFest, back after a brief hiatus to sow its Metallic seeds in the fertile Brighton soil.

The Main Man in the Maison du MammothFest is the loquacious and immensely likeable Steve Dickson who I managed to pin down for a moment, not an easy task considering his busy schedule, and asked him about MamothFest, where its come from, where its going and the road less travelled in between.

– How is the organising of MamothFest going?

Well just to give you a brief back ground, I did Mammothfest originally in 2010 and had 35k budget which was my savings from being a promoter for years and that went really well. I delivered the event but I took a financial knock and it took a while to pay the investors off and get back in the black. I had a baby, took some time off and the real relevance to getting the festival back as a going concern was my friend Rick recently died of cancer and he was my sounding board for the original MammothFest when I was pipe-dreaming.

He was the guy who helped me come up with the branding and when he passed away in December we held an Event in Brighton called Rick-Stock which was a one day event for all the bands who Loved rick came together and played loads of tunes that Rick loved and I ran that event and it really gave me the taste for it again. Because I wasn’t sure weather or not to bring MammothFest back or not. After 2010 it was such a massive thing to deal with; having a baby just after and coping with the debt. Its public knowledge now but I didn’t want people to know at the time because it was always in the back of my mind that one day I would bring it back.

But this time around, its a far lower budget, feet on the ground kind of promotion. I wanted to put it out there and see how the people would respond to the MammothFest brand.

– How has the response been so far?

The response has been amazing. As soon as I mentioned it, the MammothFest FB page just took off. I mean in 2010 we had people coming from all over; Sweden, Northern England, France and its been the same again, like “Thank God this is back”.

As I say, this time around its a 2 day event on one stage and we are branching out into having acoustic acts. I went up to Sean De Burca after he played the after-party [@ TechFest] and asked him if he wanted to play MammothFest and he said yes right away.

So we’re gonna have acoustic performances playing between some of the acts and have Zilla Cabs and Double Slit guitar stands set up, so people can salivate over some gear in between the bands too.

– What are you doing in the run up to MamothFest?

Well in the next few weeks we are doing warm up shows all over the country. We did Weymouth recently and that was great. At that show we had this acoustic duo called Tom and Ash who blew a Metal crowd away with their skills. So, I did they same thing as with Sean de Burca and asked them if they wanted to play. So they are going to be there as well.

So there are gonna be 26 acts playing and I’m hopefully gonna be growing that even further.

– Why have you chosen the acts on the Bill?

Well they are all committed bands, who are all working really hard. Thats the bottom line. I see these bands pushing E.Ps and videos; getting as many gigs as they can and I think: I want you to play MammothFest because you are producing such quality music and you are dedicated. And are producing music that is right up there, competing with the big boys despite having far lower budgets. I just have huge respect for everyone on the line-up.

We are currently running some MammothFest sponsored tours as well. Bands like Mask of Judas and Core of Io are both doing tours we are sponsoring. The lead singer from Core of Io is also the MamothFest stage-manager; so its like people get involved and in the process make opportunities for themselves.

For us as the MammothFest team, its so much more than just doing the festival. Its about creating a community around us which will gain momentum in terms of integrity which is what I love about UKTF. Me and Simon are good mates, we speak often and he’s right behind mour event, which is why we are allowed to put up MammothFest posters up here at TechFest. Its that kind of synergy that I love because I need help, we all need help. There’s no way we can build these sort of collectives and brands by ourselves.

And if we work together, anything is possible!

MammothFest takes place at The Old Green Door in Brighton, over the weekend of the 30th and 31st of August. Tickets are stupidly cheap for the amount and quality of music on offer. Take advantage of this offer and exploit both Steves hard work and the last rays of Summer for your own delectation and enjoyment.