How low can you go?

While scrolling around my Facebook newsfeed, I came across a picture of Fredrik Thordendal and Mårten Hagström holding 9-stringed guitars out of a German guitar magazine.

Look how majestic these two Swedes are with their crazy guitars. We can guess, based on the picture, that the group is messing around with the 9-string. Maybe they are even demoing new material with it. This would put the group down to a low C as the bottom note, an entire fourth below where they normally are on an 8-string, even though they have tuned down even lower previously for the song “Spasm” off of the “Nothing” album. There has been some disagreement over the internet on the subject of 9-string guitars. Some feel it is unnecessary to have that many strings. Others would say it could add so much more the music. Remember, Josh Travis (Tony Danza Tapdance Extravaganza, Glass Cloud) used a 9-string guitar to record Glass Cloud’s latest EP “Perfect War Forever”, and that EP was pretty damn good. 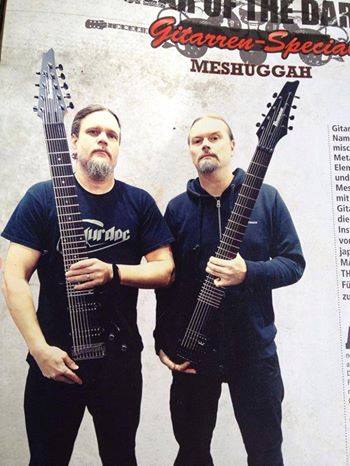 Meshuggah announced in September of 2013 that they would start the process of beginning to write their next album in early 2014. It usually takes them 3-4 years to write a record so we can assume we won’t be hearing any new music for quite some time.

What do you think? Is the 9-strings a little too much? Or are you excited about the music Thordendal and Hagström could possibly create with this new equipment. Comment with your thoughts below!