A Band of Orcs have begun beating the wardrums and have unleashed a Digital Triple Shot available exclusively on their Bandcamp page for your bloody enjoyment.

Formerly a 5-piece war machine, A Band of Orcs returns on this recording with Oog Skullbasher, Cretos Filthgrinder, and Gronk! the Shaman, as a death metal trio in the wake of the demise of two former WarChiefs.

The March of the Gore-Stained Axe Tribe EP is a warning flair to humanity signaling the savagery to come in early 2016.

Track 1: "Chata Urklud Cruaksi" is a traditional battle chant of the Gore-Stained Axe Tribe, delivered in the native Hirntodian Uruk tongue, accompanied by Oog's drums of war and the instrumental sorcery of Cretos and Gronk!.

Track 3: "Heaving Death" is the name of a plague found in Hirntodia.  The song relates how Cretos became orphaned from his original people, the Twin Blades Tribe, when the yellowed-robed priests of the pestilent sign sailed their black ship into the harbor of his former home, Trito Craa Sertrob, unleashing the alchemical plague upon his once mighty folk, utterly decimating them.  Suddenly cast adrift from his former people, this is the reason Cretos came to fight his way into the Gore-Stained Axe Tribe.

If you are part of the Bay Area California Tribe and go to the raid with D.R.I. on April 3rd you will also have a chance to meet the newest and 4th member of A BAND OF ORCS going forward, bass-player Srig Foehammer, who was liberated from the slave mines of the Hill Giants when the WarChiefs incited an uprising to defeat the horrid flesh traffickers – a tale told in the song “Of Broken Chains & Shattered Skulls” on the last concept album “Adding Heads to the Pile.”

The next chapter in the Mythos of A BAND OF ORCS begins with a line-up change and new tales with the “March of the Gore-Stained Axe Tribe” digital release.  So, enjoy the latest offering to Gzoroth from A BAND OF ORCS – “Raise your axe, raise your shield, raise your Tusks high!!!” 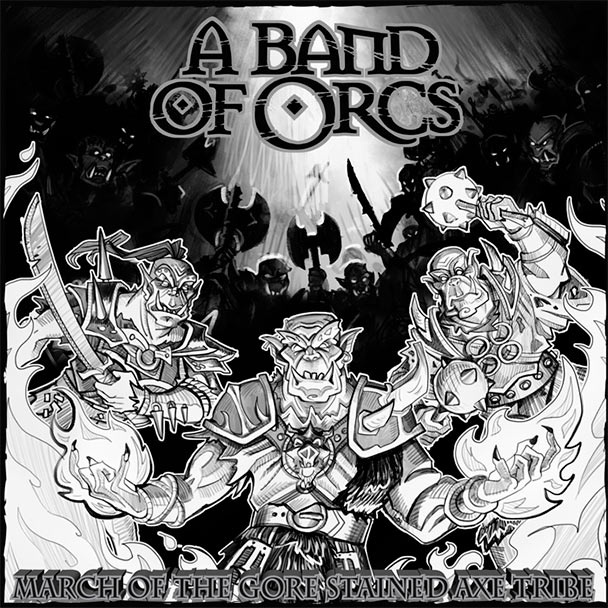