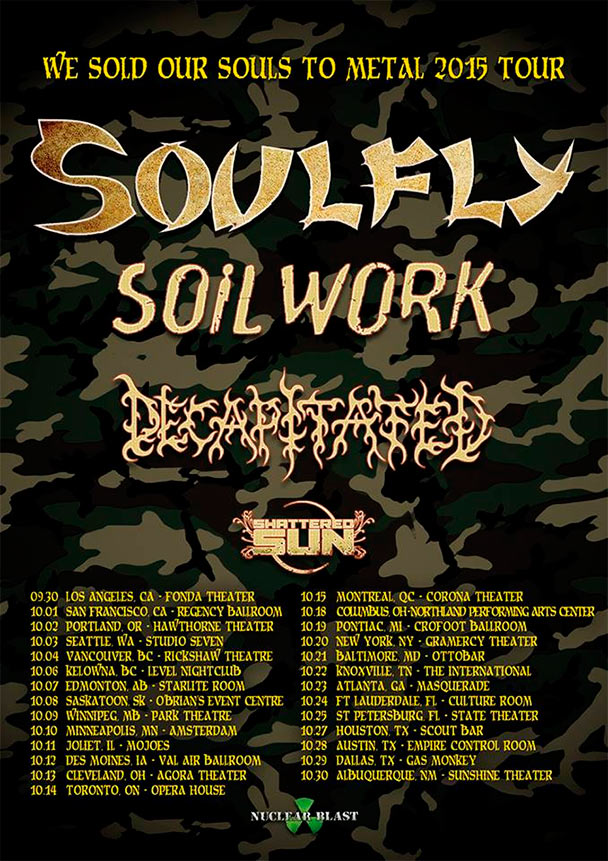 North America! A monster tour is headed your way for the course of October! Here’s the official press release with all the info:

Metal icons Soulfly will embark on a monumental North American headlining tour starting September 30th in Los Angeles, CA! The band will be supporting their upcoming vicious new release “Archangel”, which was produced by Matt Hyde (Slayer, Children of Bodom) and which will be released on August 14th via Nuclear Blast Entertainment.

Joining them on this epic campaign are Swedish melodic-death metal visionaries Soilwork, Polish technical death metallers Decapitated, and hot newcomers Shattered Sun. “This is a great package and brutal lineup,” commented the legendary frontman Max Cavalera. “I personally am a fan of all these bands and it’s an honor to have them touring with us! See you in the pit!”

Tickets for all shows go on sale Friday, May 8th at 10:00 am local time. Meet and greet packages will be made available as well. For more info and tickets visit www.soulfly.com.