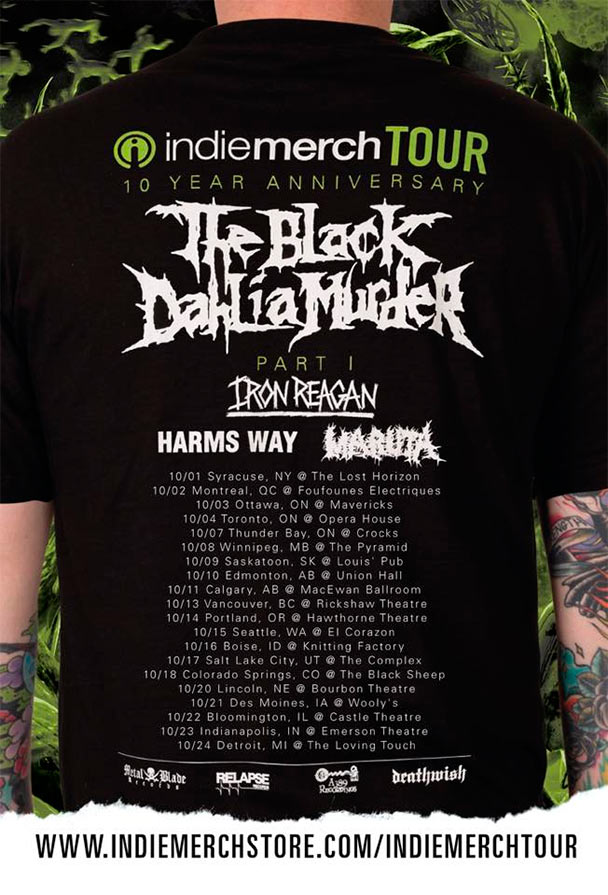 North America is about to be a bloodstain left on a map. None other than The Black Dahlia Murder, Iron Reagan, Harms Way, and Maruta are about to ravish the continent with their various brands of heavy music. This will be happening on the Indiemerch tour spanning across October and is sure to be quite a spectacle. Take a gander at the official press release down below and have a listen to some awesome music. Things are about to get wild!

The Black Dahlia Murder will return to North America this fall to headline the IndieMerch Tour with Iron Reagan, Harm’s Way, and Maruta. The trek will start October 3rd and run through Ocobert 30th and it marks the group’s first official Canadian/US tour supporting their highly anticipated new album, Abysmal, which comes out on September 18th on Metal Blade Records.

Trevor Strand (vocals) states: “We are beyond excited to bring this mighty line-up to your Canadian eardrums…what a package! We’ve combined the grinding holocaust of the reunited Maruta, the sheer rage of hardcore’s hellions Harm’s Way, the thrashing maelstrom that is Iron Reagan and of course yours truly. No venue shall be left standing in our wake! We’ll be playing lots of new tastiness from Abysmal for you, as well as the classics, so bring your friends and get ready to bang your heads off. I am looking forward to drinking a Pils, eating some Poutine and raging out with my friends to the great white north. Fuckin’ eh!”