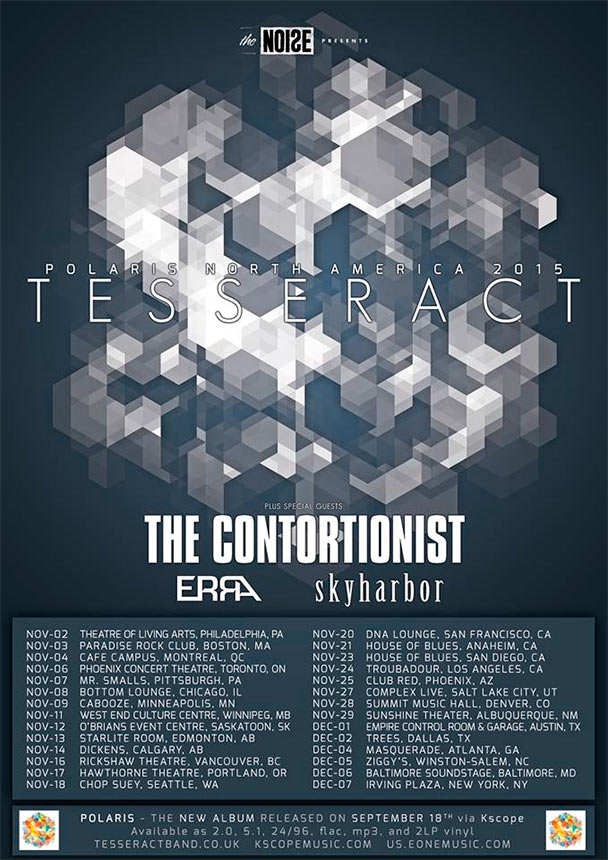 There’s one helluva Progressive Metal tour headed in a North American trajectory, covering both the United States and Canada. TesseracT will be heading the venture with direct support from The Contortionist, ERRA, and even Daniel Tompkins ex-band Skyharbor! This will be quite a spectacle to behold! You can find all the dates on the flyer up above. Furthermore, the official press release and music / links from all the bands can be found down below. We’ll see you there.

TesseracT will return to North America for a healthy batch of tour dates slated for later this year. The band has tapped The Contortionist as main support along with Erra, and Skyharbor. “Five years ago we bundled ourselves in to a van and set off on our debut North American tour,” says bassist Amos Williams. “It was not only our North American debut but also our first major tour, really.” Dates will kick off on November 2nd at the Theater for Living Arts in Philadelphia and run coast to coast making a few stops in Canada before wrapping things up at Irving Plaza in New York City on December 7th.

Tickets will go on sale Friday, August 21 at 10:00 local time. Fans can visit the band’s official website for ticket info. VIP upgrades including band meet and greet options are available for all shows.

“We’re beyond excited to announce that we’re touring with TesseracT,” says The Contortionist vocalist Mike Lessard. “They’re a band we’ve always wanted to tour with, so it will be nice to share the road with them finally. This tour is a must see for any progressive fan!”

Williams comments again on that first North American run, where they supported Devin Townsend, “We were lucky enough to be supporting the incredible DTP, from whom we learned how to project and perform. It was an experience that none of us will ever forget. Everything about it was intense, from the traveling in a tiny van, or squeezing the whole band into a single Motel 6 room, through to the stunning crowds, and wonderful friends we made. So, a little over 5 years later it is an awesome feeling to return to the US and Canada to headline a tour with that same line up that traveled all the miles, and worked so hard to get TesseracT to where it is today.”