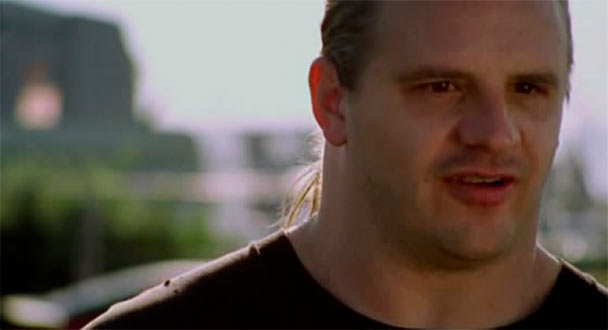 This is great. In a recent interview with Metal Hammer UK, Cannibal Corpse vocalist and legend Corpsegrinder got to talking about his massive neck – which is the stuff of legend in itself. The photo above says it all. Anyways, without further adieu, here’s what he had to say about the muscle melded underneath his head:

“Well, it’s just from headbanging and lifting weights when I was younger,” he said. “My dad had a business where he did painting, roofing and everything, so I’d work with him all day long. After that, we’d go to fishing spots to catch and eat all these fish. Then I’d jog over to my friend’s house, who lived about a mile away, and we’d lift weights. If you compare old pictures from when I was in VILE to now, it’s obviously grown and the only thing I’ve really done since is headbanging, which must be fairly similar to weightlifting.”

Asked if he has ever had his neck measured, like if he had to get a tuxedo to go to a wedding or something, Fisher said, “Maybe when I got married in ’98, but I don’t remember and it’s bigger now. If you really look at it, it’s bigger than the base of my head or where my ears are. A friend of mine once said, ‘You don’t have a head, you’re a neck with lips.’ A lot of security guys will come up to me and complain about working out, but having skinny necks, and ask how I do it. I tell them to listen to [SLAYER’s] ‘Reign In Blood’ and headbang the whole way through after working out.”