We were recently contacted by the mastermind behind quite the metal project. In turn, it only seemed right to spread the word! Bound By Metal is an interactive graph of metal history that you can check out by CLICKING HERE.

Here’s the official word on what to expect:

Experience the history and evolution of Metal

Heavy Metal has been with us since 1968. Since then, Metal has experienced many transformations and stages of evolution. Metal has developed into many stylistic forms, fused with other musical genres, and influenced and shaped legions of musicians and people. But how and when did all the developments happen that led to the numerous and versatile Metal genres we know today? That´s the question we pursue here …

The following graph shows the musical, stylistic, and cultural origins of Metal and its manifold main genres and sub-genres.

Greatest value has been placed on historical accuracy. The main source of information was the English, German, French, and Spanish version of Wikipedia, but also many articles on web pages and in magazines. The result of all these research studies is “The Interactive Metal Genres Graph”.

The graph will never stop to develop. Nonetheless, it may always stay somehow inaccurate as some musical influences and developments cannot be appraised with perfect accuracy. Everything flows into one another.

The goal of this project is to have the most accurate and interactive graph on the web that shows how Metal and its musical, stylistic and cultural surroundings got influenced and developed the Metal genres. 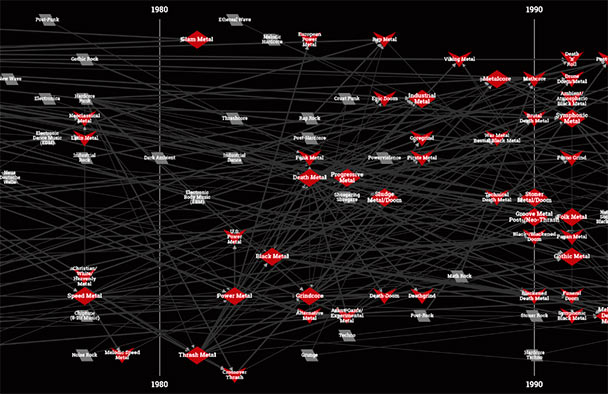