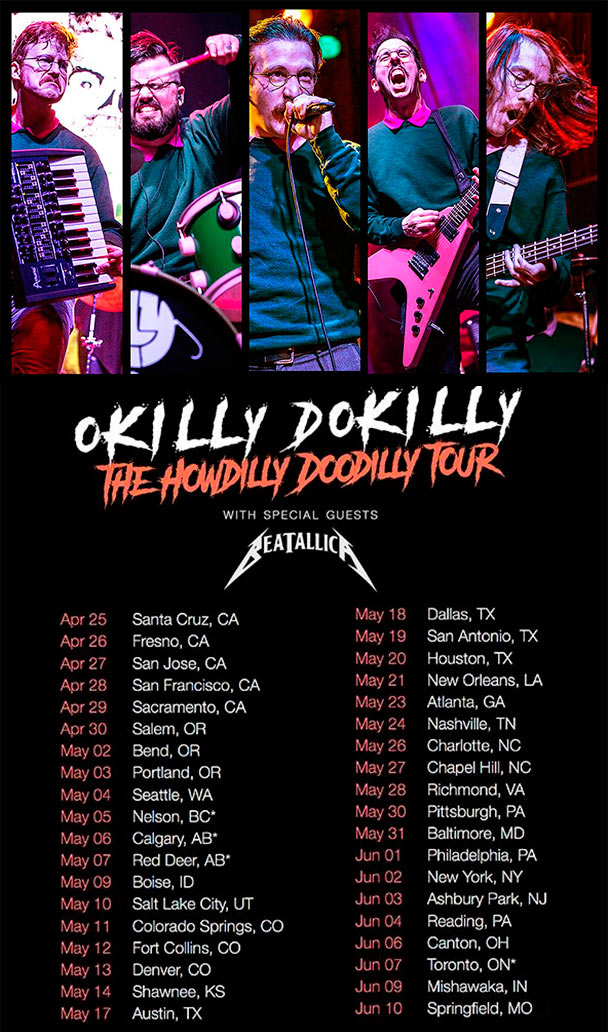 Hi-dilly-ho-dilly neighboreenos! Did you know that Ned Flanders metal is a thing? There’s a band that has literally dedicated their existence to the most doodliest Simpsons character. The world’s only ‘Nedal Band’, if you will. They go by the name of Okilly Dokilly, emphasis on the kill. They even all dress the part!

And now, following the release of their album “Howdilly Doodilly”, they’re going on tour! You can find the dates on the flyer up above and you can read over the official statement right here:

Iron those slacks and use a lint-roller on your favorite green sweater, neighborinos, because Phoenix, AZ’s Okilly Dokilly – the world’s only “Nedal” band – is coming to your town!

After finding viral success in 2015 and encouraging positive nods from the likes of The Independent, Time, Maxim, Rolling Stone and countless others, the gentlemen of Okilly Dokilly – referred to appropriately as Head Ned, Red Ned, Cred Ned, Dead Ned and Bled Ned – graced fans once again with the November 2016 release of their Billboard-charting full length album Howdilly Doodilly. In the wake of this release, the bespectacled five-piece dropped the official music video for their single, “White Wine Spritzer”.

Earlier this spring, Okilly Dokilly visited select cities with fellow heavy metal schtik-ters Mac Sabbath and Metalachi,and are now setting their sights on a set of new cities to say “hi-dilly-ho” to! The band will kick off their “Howdilly Doodilly” tour tomorrow in Santa Cruz, CA, will join up with Metallica-meets-Beatles cover artists Beatallica the following day in Fresno, and visit nearly 40 cities before coming to a stop in none other than Springfield, MO on June 10th. See below for a full listing of confirmed tour dates.

Bandleader Head Ned says: “We’re really excited to be hitting the road with Beatallica this year. Us Neds are big Beatles fans and we’re excited to crack open a fresh John Lemon or Orange Harrison and share the stage with some hilarious neighborinos! We’re pleased as punch to be bringing Nedal to so many cities and so many neighborinos across North America!”