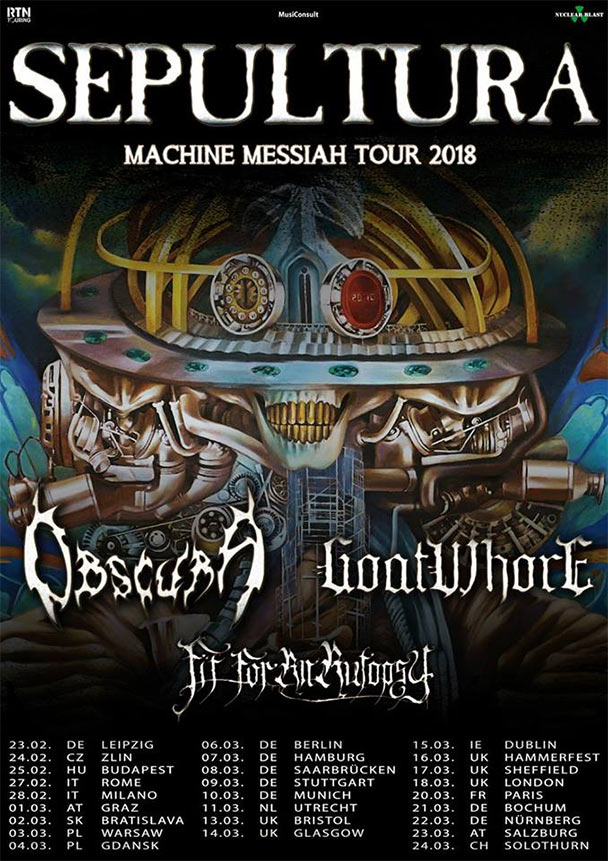 Sepultura, Obscura, Goatwhore, and Fit For An Autopsy will be teaming up to tour through Europe and the UK! You can check out all the dates on the flyer up above and listen to music from all the bands down below. You can also read over the official statement from Sepultura right here:

In early 2018, Brazilian thrash metal legends SEPULTURA will head out on a lengthy and extensive European headline tour in support of their highly acclaimed album »Machine Messiah«. Be prepared for a full 90 minutes of pure SEPULTURA, with a set list featuring new hits as well as some timeless classics.

After an extremely successful tour with KREATOR and a raft of festival shows in 2017, SEPULTURA will return to Europe with their most powerful billing yet. German technical death metal masters OBSCURA are confirmed as direct support, followed by US-based death/black metallers GOATWHORE and New Jersey’s finest deathcore outfit, FIT FOR AN AUTOPSY.

Andreas Kisser states:
“Sepulnation Europe, I’m very happy to announce our first headline tour for the Machine Messiah album in February/March 2018! I couldn’t be more excited with the bands that are going to be together with us, such amazing acts like Obscura, Goatwhore and Fit For An Autopsy! So be ready, the Messiah is on the move, see you all soon! DESTROY!!!!”