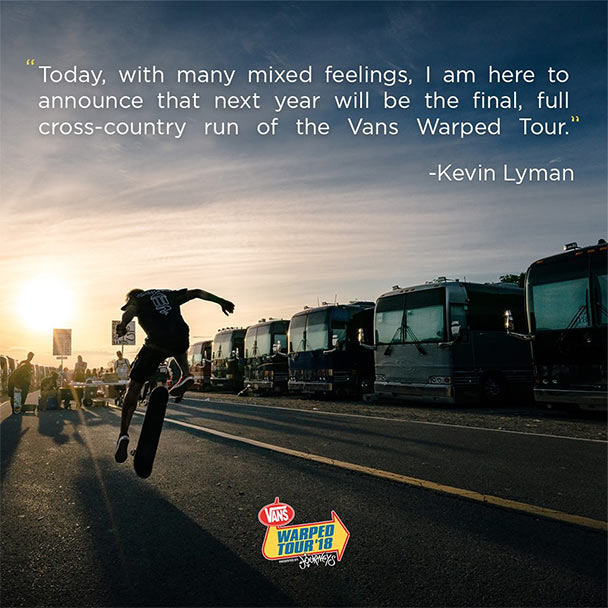 While recently speaking with Billboard, Kevin Lyman spoke candidly on why Warped Tour is coming to an end. The 2018 edition of the festival will officially be the final run. You can read the full interview by CLICKING HERE.

The news was initially announced with the statement found above. This was posted across the official social media platforms among other locations.

“We were doing fine, but we had a pretty big dip last year. It was that younger end of the demo. It was an interesting tour — the bands didn’t feel the dip because the fans that were there were super engaged… Everyone’s lining up at 11 o’clock and they don’t want to miss a band.

So that [younger] demo changed, but then I talked to people after the tour and bands did great on merchandise, they had great crowds — everyone had good crowds in front of the stage. But that casual fan that’s learning how to go to a music festival — they were not there last summer… It was a really great show, sponsors were happy, but our attendance was down.”

“…To be honest, this past summer, the 14 to 17-year-olds disappeared. I kept thinking, “Is it the Warped Tour? Is it the bands I booked?” Well no, I booked all the bands that should become the next Sleeping With Sirens or Pierce The Veil. I booked Neck Deep and Knocked Loose and I Prevail and Beartooth — all doing really well as bands. But when our demo jumped, our average age jumped almost three years last year, up to 19. So then you’re sitting there at night on the bus going, “Where are the kids?”

So I think as an industry, we’re gonna be facing some big challenges. And then some people go, ‘Well, kids are into hip-hop right now.’ And I go, ‘Well, the younger end of that is not going to shows.’ But if we don’t get kids out of their rooms and going to shows, they’ll turn into 18-to-21-year-olds soon… If you don’t have the DNA of going to concerts by then, it just doesn’t become a part of your lifestyle.”

“We’ve gotta have Less Than Jake and Every Time I Die. Because I always tell the bands, “Why don’t you pattern your life after Less Than Jake?” They’ve now been around a quarter of a decade themselves, you know? They don’t overthink it. They go out and play. They’ve managed how to navigate a career as a ska band. What’s wrong with that?

So I’m gonna support those guys. Or Every Time I Die is one of those rare bands that put out their biggest record after 10 years… Somehow, they’ve managed to figure out how to move forward. That’s the kind of stuff I want to tour with this summer.

I’d like to have The Maine and Mayday Parade and those kind of bands because they’ve shown how to navigate a tricky system. The Maine is an indie band. Those are they type of bands I’m looking to be out with. Would I love to have Pennywise, NOFX, and Bad Religion at some shows? Absolutely. Let’s see if we can figure it out.

It’d be lovely to have Eminem come back. Ice-T, maybe — he’d be fun to have out for some shows. It would be fun to have more recent bands like Fall Out Boy come back and play. It’d be super fun. All those bands from that era were welcome. Maybe Katy Perry wants to get back to her roots! That’d be awesome, huh? We’d have a spot for her. Thirty minutes, you know? [Laughs.]

She exemplified the person that I so loved working with on tour. She worked so hard. She was kind. Also, she’s been an exemplary citizen with all her work for MusiCares and other charities. Maybe in a small way, Warped Tour helped with that.

It would be cool if Blink-182 played Warped Tour again. I’ve never really sat on my laurels for what I’ve done. But I look back and there’s been a lot of people across that platform: Deftones, My Chemical Romance — they all broke around that period. Avenged Sevenfold, really — probably outside of Metallica or those bands that were pre-Warped Tour, [they were] the biggest metal band of the last 15 years to break. Avenged Sevenfold, man. They were cool. They showed up with a smoke machine on Warped Tour. Playing at 3 p.m. with a smoke machine, you know they were gonna be big at one point.”