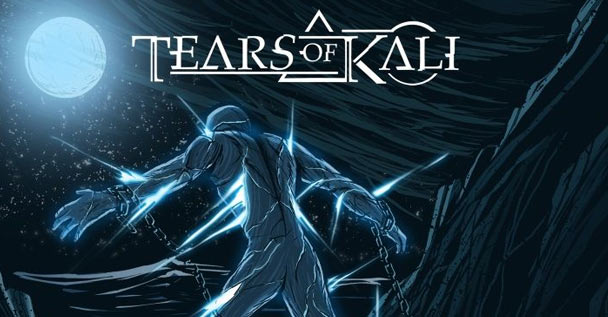 Kali is known as the goddess of time, change, power, and destruction. She’s both a creator and a destroyer of worlds. From bloodshot eyes, she cries rivers to oceans. Life turns to death. Peace turns to chaos. This is her age and we’re just living in it.

She serves as great symbolism for this band using her namesake. Hungary’s very own Tears of Kali make music that is multi-faceted, progressive, creative, and destructive in nature. They’ve adapted the modern djent sound and have twisted it to their own means, operating as a breath of fresh air, or change, for this particular style of music.

Comparable to the arms of the goddess Kali, this band consists of several members who hold an important part of the music in place. In fact, there’s a total of 6 musicians present. Patrícia Ladányi and István Rozsár respectively handle clean and harsh vocals, acting as a sort of ying and yang to top off these tracks. Zoltán Galacsik and János Krieser string together melodies and rhythmic attacks through their combined guitar work. Dániel Halmai further holds the lower end on bass guitar. Finally, Milán Leindler holds the entire structure together diligently from behind the kit. Altogether, they serve as the Tears of Kali.

Though, in reality, there’s much more happening than those base instruments! On the back end, this band also includes electronic samplers, traditional instruments, and unique percussion elements to expand and enrich their sound. When all is said and done, it makes for a particularly noteworthy listening experience that might just find itself hooked into your ears and on repeat through your players!

This all came to fruition when Tears of Kali took a “Dive Into Ascension”. That appropriately serves as the name of their debut LP. They collectively spent no less than 3 years crafting this ascent into the halls of modern metal. So while they may be relatively fresh on the map, they’re actually quite experienced and tight while functioning as a singular musical entity and it shows. The record could easily be recommended to fans of modern progressive metal, metal with oriental and atmospheric styles, strong – almost symphonic metal style – clean female vocals, and just all around good, hard hitting music. In short, this band proves to be the real deal for a number of reasons that are worth taking in firsthand.

Speaking of which, “Dive Into Ascension” is currently available at several online music platforms. This includes, but is not limited to, Apple Music / iTunes, Spotify, Google Play, and Deezer. You can also find some of their various YouTube streams right here, right now! Feel free to hit one of the provided links or press a play button!

The album is lifted on the atmospheric wings of “INK” before the voice of Patrícia Ladányi breaks in by singing out the plea, “don’t bring me down.” Immediately following this, the music itself gets heavy to break into the initial lift. Waves of groove and the howls of István Rozsár’s harsh vocals join the presentation. All in all, while not being the album’s strongest slice, this serves as a great introduction to the LP because it shows a number of the band’s main ingredients without giving the entire recipe away. As the album progresses, there’s much to discover but this makes for a solid foundation to that.

My personal favorite track on this album would have to be the longest number “Slave of Anger”. I think it stands furthest from the rest of the tracks and brings about all the band’s best elements in a single, large serving. The percussion work and looming atmospheres serve as a catalyst for the greatness that is the core track. Also, that chorus! It’s an earworm to be sure.

All 10 steps of “Dive Into Ascension” bring quality of one form or another. One of the album’s most admirable qualities is the element of fun. It’s a genuinely enjoyable and powerful ride from start to finish. While every number is worth a listen, other stand outs would have to be “Which You Are (Not)”, “At the End of All Your Nights”, “The Veil”, the single “Moon Ritual” featuring Besnyő Gabriella of Nova Prospect, and I also really enjoyed the peace of the closer “Your Journey Just Begins”. With luck, this will also just be the beginning of the musical journey for Tears of Kali!

“Dive Into Ascension” is a headfirst fall into a lush, ethereal world that isn’t without it’s hard edges. There’s often a compelling combination of sounds to be found with the turn of every track. For standing out so considerably from the rest of their particular pack, Tears of Kali have found their own consistent sound and they push it hard.

The production found across this LP is actually very sharp. Every element falls gracefully (sometimes violently) into place and enhances the experience. There’s life bouncing out of this record. Whoever polished this record from top to bottom deserves some praise. Well done.

As for cons, there really aren’t many. I will say the first time I listened through “Dive into Ascension”, it all kind of bled together in my ears but after several listens, the nuances between tracks became more apparent. As stated before, they have their own consistent sound which they really push on this record. Other than that, despite largely being a breath of fresh air from the typical djent approach, they will sometimes dip into a stereotype or two. For example, the 5 second vocal chop at 1:30 of the title track earned an eye roll from me while I’m sure others will think it’s awesome. As with all music, it really depends on the listener. Objectively speaking, I’m sure some people will find this LP to be a bit cheesy while others will fall head over heels for it.

Personally, my enjoyment of this record falls closer to the second extreme. Overall, my gut is feeling somewhere around a solid 8 to 8.5 for “Dive into Ascension”. This is undoubtedly a great debut showing off great potential from a relatively new band. With this kind of output, it’s probably safe to count Tears Of Kali among the leading edge of modern Hungarian metal. There’s plenty of light to be found in this particular age of darkness!

Once again, this album is available for streaming and purchase through several of the internet’s leading music services. Apple Music, Spotify, Google Play, and Deezer are among them. You can also give the music a listen by checking any of the assorted streams above.

Furthermore, it’s worth noting that you can keep up with Tears of Kali through social media platforms like Facebook and Instagram. Show them some love as they continue marking their place in the wide world of music!