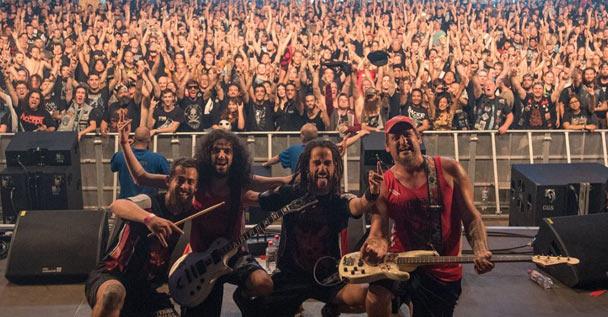 A band of four guys, born from overwhelming heat and rage of life in the 09 District of Tel-Aviv, Israel. Infiltrated with unwanted politics, forced military drafts, and a brutal militarized police force abusing their power and limiting human rights, The band was born with an aggressive message that’s been taking stages by storm through-out the country. Now, It’s not just pure chaos,Eternal Struggle are a band who understand the importance and power of being heard through music and have self-hosted charity events where food and first air supply was donated to illegal refugee ​daycares. P.M.A (Positive Mental Attitude) would be the root of Eternal Struggle.

Since their debut EP release, entitled ‘Breaking & Entering’, Eternal Struggle have sold out local venues, built a dedicated army of followers and have shared stages with artists such as Biohazard, Atari Teenage Riot, Turnstile, Deez Nuts & many from the hardcore / extreme family.

August 2017, Eternal Struggle fulfilled a childhood dream and performed live at Germany’s largest Metal festival, Waken Open Air, with an attendance of 130,000 where Eternal Made a huge impression on the crowd, sending them into a moshing frenzy, and won the judges votes, ranking them (a hardcore band!) in the top 10 from a metal festival that had bands performing countries around the world. The band was incredibly humbled by this experience and grew a thirst for more!

The future holds big things for Eternal Struggle. Anybody who has seen them live can surly admit that. The band are currently back in the studio writing new material, rumored to be produced by Brian “Mitts” Daniels (Ex-MADBALL) and released early 2019. Meanwhile they are preparing for their upcoming European tour, Fall 2018 with the hardcore titans of Sao Paulo, Brazil, WORST starting September 28th in Düsseldorf, DE.

​Make the effort to catch one of their insanely memorable shows!