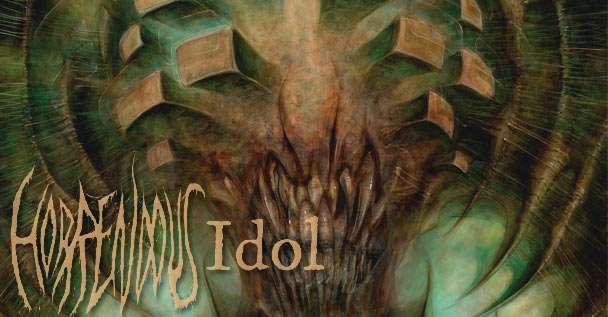 Decibel Magazine has premiered an all new Horrendous track! This was done in support of the new album “Idol” set for release on September 28th through Season of Mist. Pre-orders are currently available to those who CLICK HERE.

Regarding the new track, Horrendous comments, “Before starting the writing process for Soothsayer, we had been listening to a lot of King Crimson and I remember wanting to try writing something in the grandiose and rhythmic, multilayered style of their mid to late 70s output. I wanted to capture that same sprawling, menacing atmosphere they so frequently achieve. Some experimentation with this idea led to the opening riffs/section of the song. The rhythmic foundation of the intro is slightly off kilter, giving it a bit of an unsettling/jarring sound, and the multiple layers built on top of it add additional rhythmic and melodic ideas which provide some nice counterpoint to the main riff and help flesh out this section of the song. From there, the song constantly evolves, with spiraling, jagged riffing that shifts from angular tremolo passages into a melodic crescendo, only to return to the initial theme of the song and end. Soothsayer’s lyrics mirror this chaos, describing the intangible yet all too present and influential effects of ideology-how it can become both a sword and shield used to protect antiquated thinking, and how it can in some cases seemingly possess one’s thoughts and actions, leading to violence as a balm to ameliorate one’s fear of social, political, or cultural erasure. In Soothsayer, ideology is at once a spirit, a great influencer, a God, a harbinger of destruction, and an epidemic of sorts, the roots of which are lying dormant in all of us. It’s a song about avoiding the teachings, biases, false information and other destructive thinking with which we have been inculcated.”

Idol was recorded at guitarist/vocalist Damian Herring’s Subterranean Watchtower Studios (Blood Incantation, Sentient Horror) and follows the release of their critically-acclaimed Anareta, hailed by Decibel as “the best metal album of 2015.”