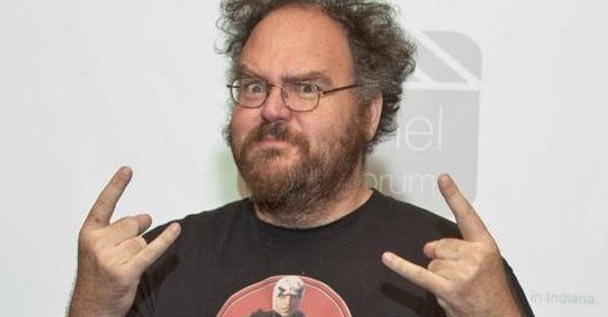 Update – It’s with great sadness that we must report Jon Schnepp has passed away… His fiancé Holly Payne left the following message:

It is with a broken heart that the Schnepp family and I must announce the passing of our beloved Jon Schnepp, who died peacefully on July 19, 2018.

Jon ultimately succumbed to the effects of a massive stroke. He had a blood clot removed from his left carotid artery, but the bleeding could not be stopped. Irreparable and catastrophic damage was caused to both hemispheres and all brain activity ceased. His sister Deborah and I had to make the difficult decision to take him off of life support. There was no possible way for him to recover. Please understand.

I spent the last hour of his life with him holding him, laying my head across his massive chest, kissing him, stroking his hair, playing his favorite songs, and telling him over and over again how much I love him. My life has been forever changed by Jon. I feel endlessly grateful to have shared 16 years of laughter, love and incredible adventures together, including the making a feature film, as well as a television series that I hope to complete and release later this year in his honor.

Jon’s mother Miriam, his father David, his sister Deborah and I are devastated beyond measure. We appreciate your love and support, and most importantly your understanding of our privacy at this time as we grieve.

Update – Here’s a new statement unveiling the cause:

Our beloved Jon Schnepp suffered a catastrophic stroke on Thursday, July 12th. Jon is on life support at this time. While everyone is desperate for updates on his condition, we ask for your understanding on giving us the privacy we need over the next few days as we deal with the difficult decisions concerning Jon’s care. Please keep him in your prayers, and in your heart.

Original Story – Jon Schnepp, who was the director of the beloved show Metalocalypse, is currently unconscious and in critical condition while fighting a severe, yet undisclosed, sickness. The 51-year-old producer, director, voice actor, writer, animator, and cinematographer let signs of his condition onto the internet earlier this month stating:

“recovering from being super sick this past week”

“going to be hospitalized for the next few days.”

Soon after, it was made known by his girlfriend Holly Payne that things were more serious. She launched a GoFundMe campaign for Jon’s benefit, stating:

“Friends, Jon Schnepp is unconscious and in critical condition. I cannot tell you the details, but it is life-threatening. That’s all I can tell you right now. I have been sharing with him how much all of you are rallying for him, and showing your incredible love and support. I’ve been sitting vigilantly beside him and whispering ‘I love you Chimpnugget’ over and over again in his ear, resting my head on his huge chest. This is the most challenging experience of my life, but knowing he is so loved helps heal my fractured heart. All of your well wishes have not gone unnoticed. If you can contribute anything to his medical bills, that will help us both. Much love to all of you.”

Please, if you’re able, donate some money to help Jon. He’s given us so much.