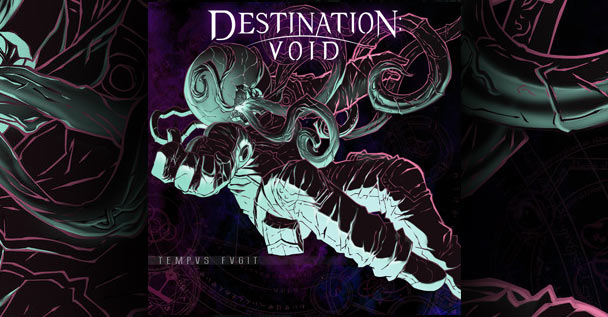 There’s a lot going for this band. Talent is a word that immediately comes to mind. They have a mind for progressive songwriting that spans a number of approaches. They’re in good company, working with people such as Evan Sammons (Last Chance To Reason) who produced their most recent album and Michael Lessard (The Contortionist, Last Chance To Reason) who filmed and edited the band’s latest music video. More than anything, there’s a fresh palette to be covered with this freshly recorded musical unit and the prospects look to be intriguing.

Based out of the northern state of Maine’s southern city of Westbrook, there are five members making this music a reality. They are Ryan Cummings and Caleb Ring handling guitar, Seth Perkins from behind the drum kit, Lucas Damen up front on vocals, and Nick Crosen on Bass. Together, they are capable of both soothing the senses and causing serious damage to the ear drums.

Collectively, they’ve constructed a new album by the name of “Tempvs Fvgit”. For a debut, it comes across as quite mature and well developed. This should be congratulated as it seems to be a rare breed capable of pulling this off. There’s always room for growth, of course, but they certainly don’t sound like a first time band on this record.

It actually makes sense when you consider the band has technically been around in some form or fashion since their inception back in 2009. They would go on to find their current line-up around 2013 and have played plenty of shows in that time. This has led to a certain cohesive nature, musically speaking, between the present band members. It certainly shows on the final product of “Tempvs Fvgit” and promises for an even brighter future for this band!

The very title of this record is a play off the Latin phrase tempus fugit which could be translated into English as “time flies”. Does time really fly when listening to this album though? Let’s find out…

In total, “Tempvs Fvgit” spans a round a 50 minute runtime across its 10 tracks. In that duration, the band manages to cover quite a bit of ground making for some quality replay ability and overall enjoyability. If you’d like to sample this for yourself first hand, you may do so by checking out the streaming links provided on this page and by exploring “Tempvs Fvgit” on platforms such as Spotify, Amazon, iTunes, Deezer, Tidal, and more.

The very opening of “Waveless” invites listeners in for an experience. It’s immediately clear that something is brewing on this album. Beautiful reverb plays off the strings of instruments through shifting progressions. Everything seems to move upward into a beautiful progression at the end.

This is all before the metal hits right away with the turn of track #2 “I the Navigator”. It’s pretty intense until it flips about halfway through with a beautifully placed guitar solo above some tight melodic songwriting. This then melts entirely into waves of atmosphere similar to a band like Deftones. There are essentially three movements to this track and it really highlights the variety that this band is capable of. In this way, the first two tracks act as a great representative of what to expect for the duration of “Tempvs Fvgit” – variety through some advanced songwriting.

There are a number of bright lights lining the track listing for this album. In reality, every track has something notable to offer so it’s recommended you just stay around for the whole experience. However, some of my favorites would have to be the single “Hive Mother” with some truly nice guitar work, the other single “The Flow Arterial” for a unique intro and a certain gravity to pull ears in, “This Gift a Curse” struck me as a side step from the majority of the track listing, “Fractured” had a very tasty mid-section and solo following some riffs that literally seemed fractured at the beginning, the guitar solo on the title track really captured my ears every time, and the closer “Anti-Synthesis” is just a jam through and through with a definite sense of finality. In reality, this is merely scratching the surface of what “Tempvs Fvgit” has to offer listeners

The production from Evan Sammons (Last Chance To Reason) comes across pretty nicely, pushing these tracks with some very nice sound. Every instrument has its place in the mix and everything comes across clearly from track to track.

Unfortunately, it’s not all sunshine with “Tempvs Fvgit” in my opinion. Despite the band’s ability to flip between harsh and clean sounds, a lot of the tracks seem to bleed together when listening to the full album (even after several listens). So, in a strange way, they seem consistent in their inconsistency (if that makes sense). I also had some trouble getting into the clean vocals. They almost seem to tread the same notes repeatedly. The harsh vocals are nice and on point though.

There appears to be a larger, conceptual science fiction story driving this album. Every track is just another piece of the puzzle as certain lyrics peak out. I hadn’t over analyzed this component of the record but it’s always great to see a band take these kinds of steps.

To answer the earlier “time flies” question, the answer is no. This album doesn’t fly by in its 50 minute prog metal epic of a duration. However, it is an enjoyable stay. In conclusion, I’d say this is a great first step for Destination: Void. They’ve successfully constructed a notable, large scale album to call their own. It covers a lot of ground and stands as a monolith among the debut albums this world has seen. In the end, my feelings around “Tempvs Fvgit” would place it somewhere between a strong 8 and 8.5 out of 10.

The amount of potential pouring from this band and the impact they’ve already made in Maine indicate a very bright future. All metal fans, especially of the progressive variety, should be looking forward to seeing what this band is capable of pulling off next after giving this album a listen. I truly feel the sky is the limit for these guys following this impressive debut.

Keep in mind that “Tempvs Fvgit” is currently available for streaming and purchase on platforms such as Spotify, Amazon, iTunes, Deezer, and Tidal along with other locations across the internet.

If you’d like to follow more closely with the band and see what moves they make in future, you may do so via social networks. Destination: Void have pages over on Facebook and ReverbNation.