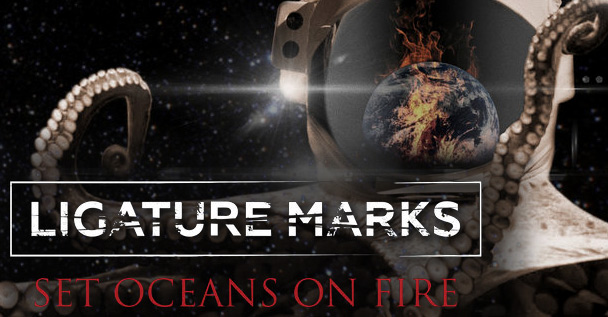 The line was belted out with such force, it went ringing around my head for a few weeks. Little did my ears know that it would come ’round once again with x5 the force. That’s because it also happens to be the title of the all new, debut Ligature Marks EP release.

For the uninitiated, this is a melodic metal band beginning to make their mark from the United States northwest. In fact, there’s some commonality with bands such as Vintersea who’ve likewise been making a name from that region (shared members for example!). They also seem to have adopted a similar aesthetic and inspiration from the undeniable beauty of this region through working with entities such as Hot Karl Productions.

They’ve been building up to exhibit their collective talents and it’s good to see it all pieced together on the “Set Oceans of Fire” EP. This was released independently in July and serves as the first step in what’s sure to be a promising discography from the band. The record draws together five tracks which run across nearly a 20 minute duration just bursting with replay value. The record is currently available for purchase and streaming in full over on Bandcamp as well as other platforms across the internet. Physical copies and a wide variety of merchandise is also available to those who CLICK HERE.

Now, onwards to the review itself! Do Ligature Marks successfully evaporate the oceans or have their flames put out? Let’s see…

The EP bursts open with metallic fury like a sword from a furnace, knocking the ear drum into a new experience. “Talisman” is prophetic in laying out the full record’s general sound. That’s to say it serves as a great introduction to a strong effort by Ligature Marks. It brings the riffs. It brings the melodies. It brings a power that is hard to argue with. I also imagine it would be pretty enjoyable live but that’s beside the point.

The record moves on to another great representative track which also served as the EP single. I had mentioned the “SET OCEANS ON FIRE!” line right at the beginning of this review. Well, this is the track where it comes swinging in like a damn hammer. It lands a few more times just to make sure the nail is driven home. “Fire and Flood” also came complete with a wicked music video which can be viewed above. From the looks of it, the band has a few other music videos on the way as well…

Speaking of the others… “Severing the Dissonance” initially takes a bit of a sidestep from the first two numbers and ultimately lands as one of the more simple and accessible tracks on the record. “The Burial” is among the darker tracks on the EP with a seemingly rare point of negativity in which an antagonist is addressed. This descends through some nice riffs and grooves as a heavy hitter. “Fight Like Hell” closes things out with a note of pure motivation in the face of adversity. It’s also among the heavier tracks on the record, coming across through several layers.

This all strikes as an incredibly professional debut effort on just about every front. The sound and the delivery are on point from open to close. With that said, Ligature Marks join the upper echelons in terms of quality delivery for a first swing. “Set Oceans of Fire” sounds great.

Ligature Marks bring a very melodic sound with every track. However, every note appears to be well considered and there’s plenty of heaviness to go around. This band proves to be fairly solid on the songwriting front. It’s hard to believe there are only three instrumentalists at play here because between a guitar, a bass guitar, and a drum kit they make a mountainous sound. Every instrumentalist delivers stand out moments of some form or fashion across the duration of this release.

The clean vocals seem to consist of the same few notes in different sequences, over and over. That’s to say the clean vocals are powerful but there isn’t much range or variety on that front. This is contrasted by the balance of the harsh vocals which are, likewise, well delivered but consistent. However, the vocalist also slips in some interesting, different moments. For example, the opening of “Severing the Dissonance” stands out. As a final twist, the track “Fight Like Hell” also includes some guest female vocals from Randi Curran. There’s also always an intense emotion present in the vocal delivery, bringing extra life to the surface of these tracks.

This is all polished together quite well on the production front, allowing everything to breathe properly within a cavernous space. On that note, kudos must be given to Gabe Johnston at Falcon Recording Studios who handled the engineering / mix and to Stephan Hawkes who added final touches with the mastering.

There’s definitely a motivational edge to this record. Listening makes you want to “fight like hell” just like the last track suggests. There’s power to these songs that will likely land it in regular rotation for some souls out there. This effect reminds me of some of the greats that have moved through and straddled the Melodeath, Hardcore, and Metalcore genres. That being said, Ligature Marks find themselves in good company on this front.

The “Set Oceans of Fire” EP doesn’t necessarily travel any new terrain, rather borrowing elements from across the melodic metal board from the aforementioned greats and reconstructing it as their very own. However, it’s really great for what it is and mostly manages to be an enjoyable experience through and through.

Once the oceans have evaporated and the Ligature Marks have healed, it’s necessary to make a final judgement on this EP. I personally enjoyed “Set Oceans on Fire” a good bit. It’s a solid release showing great promise from an up and coming band. As a first step, it left quite a large foot print. In conclusion, I have no issue giving this debut an 8 out of 10. Great record.

Once again, “Set Oceans on Fire” can be enjoyed through the links provided above. The record is available for streaming and purchase over on Bandcamp where merchandise can also be located. If you’d like to dig in a see what the band does next (especially with those music videos!) you may do so by giving Ligature Marks a follow over on Facebook.

Congratulations to this band on a solid beginning to a promising career. One can only imagine that the next Ligature Marks release will be that much bigger for it as the band continues to grow! Stay tuned!