Tulip (Monolith) Interview – the crazy backstory of this band 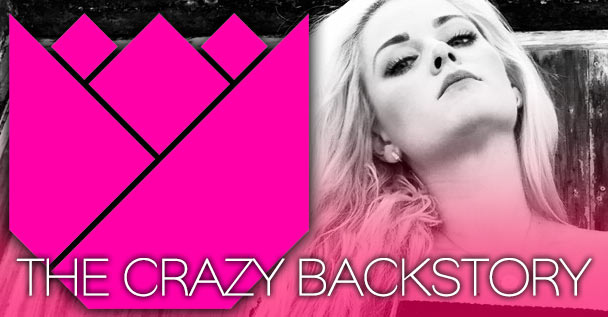 We recently had the opportunity to speak with Colin Parrish. He’s the brains behind the band Monolith who recently started an all new band of a similar style with very strong female vocals on top. They go by the name of Tulip and they have quite a bit going for them!

Most recently, they launched their debut EP which is filled to the brim with all kinds of metallic greatness. You can give a listen through the stream provided just below. Essentially, they compose Symphonic Metal with elements of Progressive and Melodic Death Metal for a winning combination. The record is currently available over all across the internet. This includes Bandcamp, iTunes, Spotify, Google Play, Amazon and more!

Now, without further adieu, here’s our interview with Tulip:

Let’s jump right in! Rumor has it there’s a crazy backstory to Tulip. Can you unpack that for us?

Ashleigh and I were both raised in the reformed Christian tradition, and met at a particularly conservative evangelical church in Toronto 8 years ago.

There is often strong cultural pressure in the Christian community to be married young, and by the time Ash and I met in our mid-twenties, we had we had both been married to other people for several years. We got involved in the church music ministry together at the time; Ashleigh was singing opera professionally while I was working on the Monolith Voyager album. It was pretty apparent that Ashleigh’s voice was well suited for metal but it was frowned upon to pursue a musical partnership given our respective marriages, so we tabled it.

Notwithstanding the obvious gravity associated with marriage and divorce, it’s hard to express the intensity with which the reformed church approaches these topics (unless you’ve lived through it yourself).

Ashleigh and I finally decided to pursue a new life together with music at the center and all hell broke loose. This was appreciable on a personal level but the church leadership who had loved us for the better part of a decade, now made it their mission to make an example of Ashleigh.

She was excommunicated and publicly ostracized. The church elders were dispatched to her home to shame her into submission using a tactic they described as “holy duress”. We were both subjected to months of Christian “counselling”. The church members, as well as our family and friends were told not to engage in any form of fellowship with us, and most have abided by this decree. In a fitting twist of irony, the entire ordeal has fused the two of us together rather than having ripped us apart. The TULIP EP is the culmination of our last year of chaos – the musical expression of our new life on the other side of the wall that we climbed over together. We certainly have a new perspective on the church, and the whole experience has humbled us in a way that’s been mostly positive, but we still have a lot of rebuilding to do. Music has an incredibly cathartic, repairing effect for both the artist and their audience. As we continue to grow TULIP we hope it will become an extension of our experience in the church, and that it will serve as a platform for exploring faith, spirituality and the mystery of the universe with a healthy dose of skepticism.

Damn. Suddenly, parts of the Tulip EP make that much more sense. Sorry to hear of your ordeal but I’m glad to hear things are looking up now. Now, Tulip is essentially music similar to your band Monolith with strong female vocals on top. Given the likeness, do you envision one of the two becoming the primary musical pursuit or do you plan on pushing both full force into the future?

Monolith projects have become more challenging to facilitate because Mike (vocalist) has moved across the country and we’re both busy with day-to-day life. That said, we certainly intend to keep working together remotely and will likely release something next year – either an instrumental album or an EP. TULIP is going to become a stronger focus given that Ashleigh is so talented and we’re always together.

That makes sense. I’m glad to hear both are moving forward in some form or fashion. On a similar note, vocals aside, what would you say is the biggest difference between Tulip and Monolith?

I think the biggest difference between the bands is driven by the fact that Ashleigh’s non-classical sensibilities are more toward groove oriented music. It’s not quite as pronounced on the EP as it will be going forward, but she’s more excited by asymmetrical bouncy rhythmic parts than the riffing guitar-driven style that’s more representative of Monolith. When I introduced Ashleigh to metal, I would just play 8 string djent bands for her and tell her to think of it as if hip hop had an angry cousin. It worked. She loves Meshuggah.

Well… It’s hard not to love Meshuggah! Once again, I can see that reflected in the new music. Is there a story behind the band name Tulip?

Ah. Further to question one, TULIP was initially supposed to be an exploration of the central tenants of the Calvinistic branch of Christianity. It’s an acronym employed by the church to remember the 5 points of John Calvin’s teachings on predestination. The basic premise is that God has preordained a subset of humanity (known as “the elect”) to enter into heaven. Even within Christian orthodoxy this doctrine is hotly debated because of the obvious implication that our free will is an illusion, and that God has (apparently) willfully damns some of us to hell. Certainly, I can appreciate the fact that to an atheist or agnostic person this all just sounds like lunacy, but within the framework of the Christian worldview there are many biblical texts that support this interpretation. As we unpacked these ideas against the backdrop of our on-going struggle with the church, the lyrical content became more of a critique. The name TULIP also just seemed to lend itself well to a female-fronted metal band.

If you could choose a single track from the new EP to show the entire music community, which would you choose?

I think track 4, Irresistible is the best from a songwriting perspective but Ashleigh’s favorite is Perseverance.

Both good choices. Perseverance was probably my favorite as well. What was your favorite part of making the new EP and what was the biggest challenge?

Part of our vision for our new life was relocating from Toronto to Texas. We bought a small ranch style home outside of Fort Worth which has these high vaulted ceilings that provide a surprisingly usable natural reverb. Because of this, our favorite part of making the EP was tracking Ashleigh’s vocals in our great room. The biggest challenge in making the EP was tracking Ashleigh’s vocals because she is so fussy about singing with headphones (she hates them).

Toronto to Texas is one hell of a move! Once again, I’m glad it’s working out – headphones aside. What else can we expect from Tulip? Music videos? Live shows?

We’re planning a full-length follow-up with many of the instrumental parts and an overarching lyrical themes already in place. Ashleigh’s primary inspiration in music is the performance art component of singing live so we are looking at a few ways to get moving on shows and music videos in 2019. For the diehard metal fans, she’s been working with the great Melissa Cross on integrating some screaming into her vocals but we’re not making any promises just yet.

Awesome! If you could guest feature any musician, dead or alive, on your next record, who would you choose?

I would choose Ashleigh and she claims she would choose me (although she’s probably just being nice). Regardless, 8 years was plenty long enough to make music without each other.

That’s admirable. Looking forward to hearing more! Those are all the questions we have for you today. Any last words for the listeners out there?