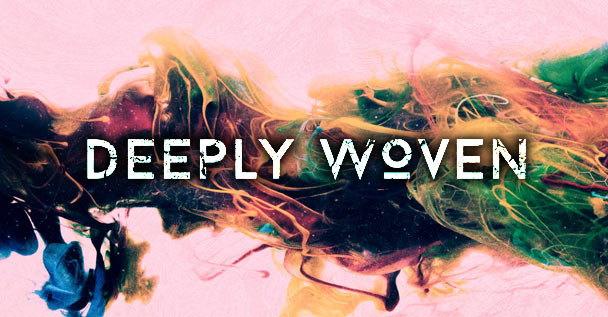 Threads came together to form a musical fabric across the southern reaches of New Jersey. This band is Deeply Woven. Their craft comes down to composing intricate Progressive Metal / Rock music with flavors of jazz fusion and atmospheric work in order to blanket any ears that happen to pass through their wavelengths.

The latest addition to the Deeply Woven discography is actually a self-titled EP release. This recently hit the world as an independent effort from the band. Altogether, it clocks in at nearly a half hours’ worth of quality listening across a 6 track spread. Honestly, it feels just shy of a full-length album because there’s a lot happening in that run time.

Given the release of the EP last week, the music is now available for streaming and purchase primarily through Deeply Woven’s base over on Bandcamp. You can find that particular stream along with the troupe’s recent music video for the single “Weatheria” down below! The music is also available on platforms such as Spotify.

So does this self-titled effort stand up to band’s namesake? Let’s explore…

This record has a very lush and natural sound to it. This is music that feels just plain good to listen to. It’s equal parts relaxing and impressive which isn’t a typical feeling from the Progressive Metal field but, rather, comes from the other elements Deeply Woven inject into their music. This is almost like vacation vibe Progressive Metal. It’s the kind of music that would be perfect for a hike or a day at the beach. My girlfriend even said she enjoyed this and she’s not exactly a prog head!

Feeling aside, there’s a notable complexity and attention to detail that comes with these tracks. The band has a great sense of composition that they really push into their music without it being overbearing. There’s a balance to making music (especially instrumental prog music) enjoyable to most parties and Deeply Woven appear to have found a sweet spot along the spectrum.

Deeply Woven chose an appropriate name for their band. The Exivious reference is obviously a plus. However, they quite literally weave together deep and beautiful melodies and textures to make their sound come to life. This effect is pleasantly present on just about every track put forth on this effort. There’s absolutely no shortage of talent present in making this a reality.

“Sky’s Limit” seems a suitable title for the opening track as it’s immediately clear that the sky may very well be the limit for this band. You can’t hear anything in space but listening to Deeply Woven may very well transport listeners to another world. Right off the bat, the band starts to mix other instruments besides their core into the overall sound. A piano emerges on top at one point and, if I’m not mistaken, a Rhodes is placed lower in the mix towards the end.

Every track on this EP comes strapped with high points. “Holoport” includes a lovely saxophone cameo towards the end, literally making the atmosphere feel like some futuristic spaceport in conjunction with the band. “Mrak Attack” has some lovely, shifting textures and memorably evolving riffs through its duration. “Weatheria” served as the EP single for reasons I’ll let you enjoy firsthand through the music video provided on this page. “Chirality” is defined as a geometric property of some molecules and ions. The song, however, is full of emotion serving as one of the more somber cuts on the EP while still displaying many sides. The pattern about halfway in is quite compelling. “Ghost” is the calming closer ultimately bringing everything together.

This is a very fluid EP release. Every track seems to bleed into the next even if it’s not done intentionally. That’s to say every number fits the experience like the piece of a puzzle. It’s not always in the same vein but you can tell all these numbers truly belong together.

This is an instrumental band that really doesn’t need vocals or words to push their sound forward. They do all the story telling through the voicings of their instruments which they seem to have individually, more or less, mastered. The placement of all these instruments feels just right within the composition.

Music aside, the sound quality present is also phenomenal. Like I just said, every instrument has a place in the mix where it can properly shine a light into the listener’s ear. The layering and overall presentation is solid from start to finish. That being the case, shout out to individuals like Adam Bentley who handled the mixing and mastering process (also a member of the mighty Arch Echo and Absently).

One would not be hard pressed to draw parallels between this band and some of the modern greats in their lane. The riffs on a track like “Weatheria”, for example, remind me a good bit of Animals As Leaders. Other moments might bring up thoughts of CHON and a few others. I had also just mentioned Exivious (Damn… I miss those guys…).

I really don’t have any arguments against Deeply Woven’s self-titled effort. I enjoyed listening to it very much over the past month or so. A part of me wouldn’t say it’s necessarily full perfection but it’s getting pretty damn close. Sure, like I just said, you can draw parallels to bands like the aforementioned Animals As Leaders and CHON but that’s far from a bad thing. Should be very interesting to see this band grow into the future.

When looking to see just how deep this album went, I was not disappointed. There’s a lot of value and content to be uncovered in a record such as this. The fabric of this band stands the test of greatness. They truly are Deeply Woven. I have no qualms giving this one a higher score in the ballpark of a 9 out of 10. It’s a really well-constructed effort from a really talented group of gents. Well done.

Now that we’ve directly broken down the music, it’s time to give some direct credit with a couple shout outs. The four members behind the bright sound of this band are Jorge Torres and Shawn Hadid on the guitars, Sean Wallace on bass, and Steve Wilson (not to be confused with Steven Wilson – why do I feel like he gets that all the time?) on the drums. Altogether, they make for a solid prog unit capable of competing with some of the best out there today. They should be proud of their abilities and music fans should be paying attention… There’s a lot of potential for further greatness on future releases!

Once again, you can give a listen through the streams provided on this page. That includes their recent music video for the track “Weatheria”. Keep in mind that the Deeply Woven self-titled is out right now with music and merch orders currently available to those who CLICK HERE. You can also stream the goods on Spotify.

They actually have an upcoming show to celebrate the release of this EP! It’s happening on October 6th @ The Music Ward in Philadelphia, PA. They’ll be joined by Invalids, In The Presence Of Wolves, and earth7 for this performance. Tickets are currently available to those who CLICK HERE. Come out and witness some great music if you’re able!