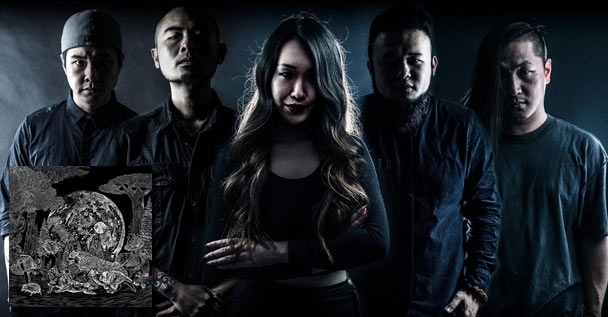 There’s a dark, new sound on the rise from the reaches of the Hong Kong metal underground. Branching out like a tree, Synergy are finding their way into sound systems the world over with their blossoming approach to metal music. Their sound could primarily be boiled down to a cross between Death Metal and Progressive Metal with sprinklings of Post-Metal across the presentation as well. All in all, it makes for quite the unholy matrimony.

This year saw the release of Synergy’s debut full-length album through Nowed Records. It made moves to exhibit the sounds described above in full (and some). The LP goes by the name of “Laika” and boasts nearly a 50-minute runtime through its 7 collected tracks. So, as you may image, these are anything but short songs. While the intro itself is only roughly a minute and a half, these tracks average a good chunk of time and can reach nearly 10 minutes in length. That being said, there’s clearly no shortage in the effort department when it comes to this band’s creative process! Considering this is the band’s debut full-length effort, this all makes for a considerable first impression.

If you wish to give a listen for yourself before delving further into this review, there are several streaming options available across this very page. Press those play buttons! Or, to take it to the next level, you can stream and purchase the album through platforms like Bandcamp, Spotify, and iTunes among other locations across the internet.

Now, let’s get into the meat of this review… For the most part, the composition across “Laika” is quite solid. This band is obviously steeped into the older eras of Death Metal music as well as a stretch of heavier Progressive Metal approaches and it reflects positively across this output. They dip their toes into other streams as well, all in a go to twist the listener’s perception through a number of methods. There are several intricate and compelling moments to run ears over. Everything from harsh vocals to clean, furious riffs to the glacial variety, blastbeats to grooves, open soundscapes to walls of sound, and beyond can be found on this LP.

This is all composed by a collective of five members going by nicknames. There’s a female vocalist, both harsh and clean, up front who goes by the name of Bambi (which must make the rest of the band Thumpers… I’ll see myself out…). Manson is the bassist bringing up the low end. Howard’s the drummer holding down the rhythmic elements. Then last, but certainly not least, Davey and Wolf serve up the guitar work and primary textures across the record. Together, they’re capable of pulling together some pretty good metal tunes!

All the songs put forth across the experience of this album clearly belong together. Despite the given differences of just being different songs, there’s a common thread and tonality in the approach each track has, making them a nice family.

Despite this level playing field, there are plenty of standout moments to go around. For example, the guitar solo and riffs on the first full track “夢道” (roughly translates to “Dream Road”) are blazers, “Dromos Home” comes across as an adventure for the ears from the opening moments to the heavy end, “優越論” (“Superiority Theory”) is the shortest track (with the exception of the intro) but is absolutely bloodthirsty with some memorable leads to boot, “迴” (“Return” brings about interesting progressions throughout it’s play time, and “Sodom and Gomorrah” closes out the whole experience on a high note (possibly my favorite track here next to the aforementioned “Dromos Home”). That’s really just scratching the surface. You’ll have to give a listen for yourself to discover the gems across this track list.

There’s a definite sense of metallic nostalgia while listening to “Laika”. As hinted earlier, it kind of throws my ears back to moments of older Death Metal music but puts differing twists on it. I guess, in that way, it manages to keep a foot planted in a metallic past while throwing the other foot forward – or at least in another direction.

Unfortunately, while much of the delivery across this album is well executed, some segments can be lacking for any number of reasons. There’s a certain looseness to segments which is a handicap for a genre of music which strives to be as tight as possible. To put a positive twist on it, however, nothing sounds fake or overblown. There’s a definite “live” and authentic feeling to the performances put forth on “Laika” when everything else out there seems to be moving further in a quantized and almost robotic trajectory. On the other hand, Synergy feels real.

The production behind this album is largely serviceable but, unfortunately, was another weak link in the grand scheme. While everything can be heard clearly, there’s a certain mud coming through the mix that causes it to sound better on some sound systems than others. Also, the louder this record is – the better it sounds (but that’s true for just about anything, eh?).

To put out a final word on this one, it’s a good album and a nice adventure for the ears. It’s not 100% there but I did enjoy it for what it was and, more than anything, had a good time blasting it in the car during recent weeks. I wouldn’t say this album is for everyone but if you enjoy a nostalgic, hybrid take on Death Metal music mixed with all sorts of other metal approaches, the Synergy debut may be for you! It also left me keen to see what ground they may cover moving forward from here! In the end, I was feeling somewhere around a 7 out of 10 for their debut effort.

Once again, the album is available for streaming and purchase through platforms like Bandcamp, Spotify, and iTunes. You can also give a good listen through the streaming options provided on this very page up above.

If you’d like to learn more about Synergy and follow their progress as a band, they’re active across a few key social media platforms. This includes the likes of Facebook, Instagram, and YouTube. Get to it and show these musicians some love as they continue their elevation from Hong Kong!