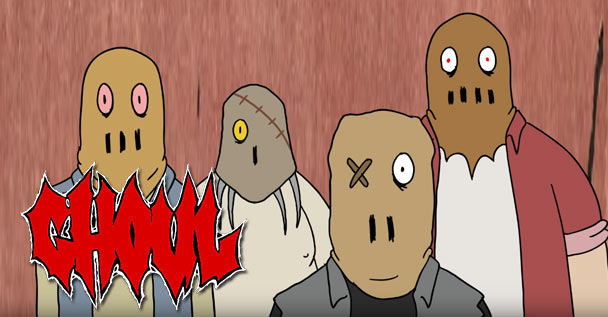 Ghoul came out with a pretty damn entertaining music video for their track “Shred The Dead”. It’s a fully animated skate, metal, gore fest waiting for your eyes. It can bee seen right here:

The clip was directed by Zak Kirwin who had the following to say:

“When I talked to whoever runs Ghoul‘s social media, I was itching to animate a Ghoul song. The music and aesthetic are right up my alley. When they came back with the idea of doing ‘Shred The Dead,’ things really kicked off. Skateboarding, zombies, riffs, and grievous injury… what more could you want?

After that, I was chained to a desk in a Creepsylvanian ‘animation’ studio, drawing till my fingernails cracked and bled, subsisting on nothing but corpse juice and old hot fries. I lost two fingers and partial vision in my right eye. Do I regret it? Of course not! Do I wake up screaming every night? Yes, but I always did that; it’s just louder now.”