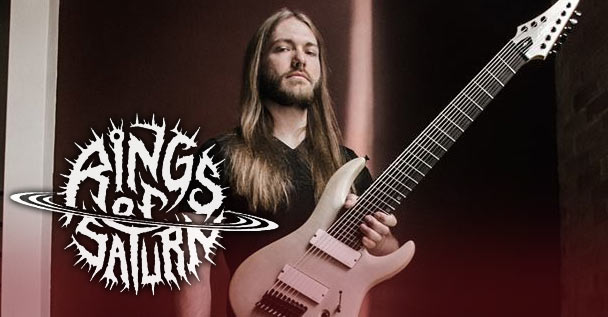 Here’s what Rings of Saturn guitarist Lucas Mann has to say of his extended touring absence in a recent statement:

“Many of you have been asking me why I took a hiatus from touring these past two years, and why I have repeatedly said to please be patient until I make an official announcement for everyone when the time is right. I will be returning to the stage with Rings of Saturn for the first time on the Dank Memes Australia Tour 2019, so the right time is now to explain my absence. This post comes from a very personal place and the reason I am making this public is because I care about the fans and want them to have some understanding as to why the decision of a hiatus needed to be made.

“There are a multitude of reasons that led to the decision of me taking a hiatus, but the most prominent of all is that I was physically assaulted quite badly at a metal show. Without going into too much detail, the court case took almost the entirety of those two years to conclude. This is not something I wanted to bring to the attention of people online when it happened as things were already stressful enough for me during that time, so I never spoke of it publicly until now. Unfortunately, this wasn’t the first time I have been physically assaulted in the metal scene (I never spoke about any of the times I was), but this recent time gave me some realizations that I couldn’t choose to ignore any further.

“No one deserves to show up to a work environment that is so hostile and threatening to the point of physical assault or bodily injury every day. These threats have not only been focused at myself, but to the ones closest to me as well. This all started with the numerous hateful Metalsucks articles at the beginning of my career, and over time it has all really snowballed out of control into a mob mentality that no matter how I act or what I do, that mindset doesn’t change or gets worse. I have dealt with probably the highest form of extreme online toxicity, threats, and general unwarranted hatred that manifests into real life heckling at shows and it’s something I have had to deal with every single day online or in real life over the course of my nearly 10 years of touring with Rings of Saturn.

“(Evidence to this can be seen when I made that blue post on Facebook. It went viral overnight and received 2000+ hate comments from the whole scene against me because everyone is so overwhelmingly convinced of their views on someone they don’t even know. I have never made abrasive posts like that before that blue post, and it’s extremely out of character for me to act that way, but people are already so convinced that they instantly believe it to be serious regardless. This same dynamic also goes for any rumor people make up and spread about me as well. I see so many ridiculous rumors about me all the time (even for my touring absence for example) and people accept whatever they hear regardless of the facts or even what I say. This is often why I do not tell my side of any story you may hear about me because once peoples minds are made up, nothing I can say will change what they choose to believe. I hope that people can see the real reason behind me experimenting with posts like that recently and how it serves as an exposé into how intense the whole situation surrounding me really is. If anyone else had made posts like that, no one would have cared and people would have given them the benefit of the doubt or laughed it off.)

“In addition to dealing with all of the above daily and the multiple assaults in the past, here are the other reasons that led to the decision of a hiatus being made. Again, I don’t wish to go into too much detail about them as they are also quite personal. Multiple members of my family had passed away during this time. I was moving across the country. I was helping a family member on a different cross country move as well. I became very sick for a few months to the point where touring wasn’t an option in my condition. I am a extremely introverted person with anxiety around people in general, and people take that personally and get offended when they meet me which further fuels this disposition against me. The whole cycle of that is just very exhausting, and is not something good for my mental health on top of everything else.

“This is a lot for anyone to deal with, and quite honestly I have always put my personal needs and mental health on the back burner while focusing on my career first. With Rings of Saturn being my project, I had a very important decision to make at that point. Either put the whole band on hiatus until I am ready to come back, or keep the band touring while I take the time I needed to recoup mentally and focus on what was going on in my personal life. Knowing that the band is a source of income for the others involved, I did not want to take that away from them, and chose to take a personal hiatus as the best option and so fans could still see the band as well. Even during hiatus I worked on and completed the bands new album coming this year in 2019, as well as managed the band everyday, but I made sure to focus on my personal life and mental health first and foremost so I would be able to come back on tour because it is something I do love to do.

“I am very excited to come back to the stage and shred the new 9 string Legator Guitars with Rings of Saturn in Australia. Now that I am ready, I am going to start slow and do a few tours at a time, until I am comfortable coming back more and more. The other guys in the band, as well as my management, Extreme Management Group, Inc., and record label, Nuclear Blast Records, have all been very supportive of me during this time so huge thank you to them and everyone working behind the scenes as well for being so understanding. Thank you also to the fans for being understanding and patient while waiting for an official announcement. Hope everyone is excited for our new album dropping in 2019! Details on that will be the next big announcements from us!”