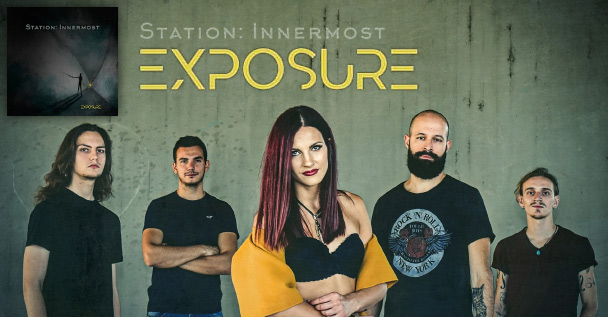 Enter the Station: Innermost. This is a Macedonian band that will bring you inside a world of music composed from differing twists and turns, high mountains, low valleys, and even a nice beach. That’s to say this musical unit has a solid grasp on making Progressive Rock which can manifest itself under a number of approaches from the lovely to the more incendiary.

This all comes together on the band’s debut EP “Exposure” which provides 27 minutes of content through an interesting mission. That mission was to create 5 tracks which act as separate reflections on psychological states in the modern world. All 5 of these stories appear to have come from people the band had met while travelling. They took that base inspiration and made it something of their own to show the world in turn. Do they succeed in this mission? Let’s find out.

Before we dig too far, it bears saying that the official release of “Exposure” will be this Wednesday, May 22nd. At that time, the EP will be made available on most major online digital and streaming music platforms. For now, you can enjoy some of the music firsthand by the YouTube stream / preview provided by the band themselves.

The EP opens up with the track “Dana” which almost immediately strikes with a very nice, groovy riff to reel listeners in before introducing the full extent of the Station: Innermost sound. It immediately becomes clear that this is a fine example of European Progressive Rock in the modern day as the band provides a strong introduction with this track.

This introductory number is followed up by “Alternate Reality” which opens with some strong Progressive Rock composition which eventually unveils some very nice vocal hooks. This explodes into an instrumental exhibition shortly before the halfway point before ultimately returning to a closing vocal line.

“Xeno” is an immediate delight to the ears with a lush approach all around. The driving force behind this track is certainly from an instrumental approach as Natasha’s voice goes to join the other instruments sans the lyrics. It sounds like going on a mental vacation so lay back, close your eyes, and give a listen! This and the final track “Saying Farewell To Sound Mind” are probably my favorites off the entire project.

By complete contrast, “Say” is a somber listen walking paths of love and loss. If you’re looking for a slow, sad song on the record, this would be it.

“Saying Farewell To Sound Mind” is a worthy ender that naturally picks up where “Say” leaves off only to explode into some truly awesome riffs and stand out moments. It also features a notable voice change from the vocalist, some of the record’s most technical passages, and a largely instrumental exit from the experience allowing the musicians to really flex their muscle one last time. It’s also, by far, the most metal track on the EP \m/

There are plenty of moments strewn across this record that remind me of Progressive music greats. From the tight groove of the musicians to their overall compositional work, there’s much talent and plenty of great ideas to be found across these ranks. Also, some of the choruses across this EP are nothing short of gorgeous. The hooks on “Alternate Reality” and “Dana” come to mind. There’s wonderful use of vocal layering to really make these pop. For some reason, it reminds me of the Devin Townsend “wall of sound” approach but with some reservations.

Every member of Station: Innermost has a great performance on “Exposure” as they prove to be a solid musical unit from the ground up, both in terms of individuality and team performance. The frontwoman Natasha Miha covers several duties from vocals to keyboards and programming. Damir Puh and Stefan Petanovski both diligently cover the guitar work and programming duties. Darko Fotinovski brings the rumble with the bass. Last, but not least, Dejan Apostolovski provides rhythm and a backbone on the drums.

There are two primary guests to be found across the track list on “Exposure”. In fact, they end up landing on 3 of 5 tracks. They are Derek Sherinian providing additional keyboards and Adi Imeri bringing supplementary vocals.

The album comes across very nicely in terms of sound quality and production. The record was produced, engineered, and mixed in house by the band’s own guitarist Damir Puh and ultimately mastered by Steve Kitch.

In the end, I don’t have many criticisms of this record. At worst, I would say it can feel a bit cheesy at times but usually in an endearing sort of way. Other than that, the pacing between different tracks can make for a strange flow while listening from beginning to end. There’s great variety but it doesn’t always seem to fit together. For example, “Xeno” into “Say” feels like a total 180° which could’ve been smoothed over in a number of ways. However, for the most part, the band seems to have sure feet and a set of good heads on their collective shoulders.

To answer the earlier question of success in the band’s mission of bringing about different reflective psychological states, I’d say they did it! All 5 tracks convey differing emotions leading to a whole spectrum of sound just waiting to be explored and interpreted.

To conclude, if you enjoy Progressive Rock, it’s easy to recommend a listen to Station: Innermost’s “Exposure”. It brings forth several great tracks worth digging into. In the end, I’m feeling about an 8 out of 10 on this release. Well done.

Once again, “Exposure” will show up on most major online digital and streaming music platforms this Wednesday May 22nd. You can also find a single and an EP preview across this page. In the meantime, there are a number of ways to connect with the band and learn more about their music and mission. You can find them on sites such as Facebook, Instagram, and YouTube. They also just launched an official website.

That’s all we have for you folks today. Enter the Station: Innermost and enjoy!