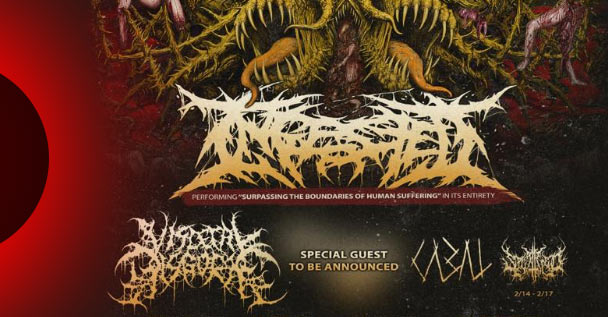 Ingested have just announced a headlining trek to cross North America in 2020. They’ll be joined by no less than Visceral Disgorge and Cabal to make this happen with a few select appearances and a “special guest to be announced”.

This is being done to celebrate Ingested’s 10 year anniversary of the album “urpassing the Boundaries of Human Suffering”.

Dates and music from the bands can be found across this page.

Here’s what Ingested had to say about this run:

“10 years ago we put out our first ever album ‘Surpassing The Boundaries Of Human Suffering’. Since then we’ve had the privilege to tour North America many times, meeting new people and making friends along the way. What better way to celebrate the tenth anniversary of our debut album than an extensive headline tour across the USA and Canada?”