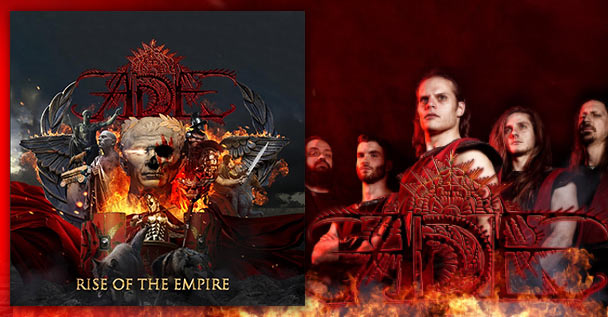 I have been hyped over this band for years now. Ever since I came across their sophomore album “Spartacus” in 2013 (with no less than Nile drummer George Kollias!). Imagine the Spartacus TV show soundtrack meshed with some brutal gut pulping Death Metal. This is essentially ancient Italian Folk Metal turned up to 11. They quite literally incorporate ancient instrumentation from the region with their heavy hitting approach and the results are glorious.

Their latest album “RISE OF THE EMPIRE” feels like being right back at home with their innovative yet entirely traditional approach to extreme metal music. It has such a great drive behind the music and is broken up beautifully between varied traditional interludes. One moment, you feel like you’re on an ancient Roman street at night – the next, you’re thrown into bloody turmoil by the hectic instrumentation! It’s a pretty damn great time.

As such, there are plenty of interesting composition choices across this beast. As hinted with the earlier reference, there’s quite a cinematic tilt with much of the composition on this record (and frankly, all of ADE’s work) which makes it easy to let the imagination run off to Rome while listening. They do an effective job of painting a well-developed picture with their music.

Every track hits home in a different way. I really don’t see any weak links with this record. Of course, I’m a bit biased being a fan but what can I say? ADE have kept true to their initial sound while expanding upon it some attention grabbing and effective ways. They’ve evolved gracefully as a band (if one can use the word graceful to describe this caliber of Death Metal…) Listening to this album reminds me a great deal of my first encounter with their “Spartacus” record in the best ways possible. However, it’s also clear they’ve pushed that approach into some new territory.

They seem to be using some of the traditional instruments in new ways in comparison to their previous material. This natural and modern progression of the tried and true instrumentation of yesteryear makes for an interesting duality.

The overall sound of the record in terms of production is also great. It’s clear that great effort and consideration were allocated towards creating a high-quality final product. The end result sounds huge with a variety of sounds all making their way cleaning through the mix while still functioning as an opposing wall of sound. Very well done!

In the end, out of pure enjoyment and just how impressive this album can be, I have no real issue giving this one a very strong IX / X. Chances are rather strong that, after this first rotation, I’ll revisit this album and the rest of the ADE discography in future years.

Naturally, it won’t be everyone’s cup of tea. I’m sure some people will find it a tad cheesy and of course Extreme Metal doesn’t appeal to everyone on its own. However, if you have a taste for blood and historical themes, this album may very well be right up your alley!

You can give a listen to the goods through the streaming links provided across this very page. Their music is also currently available for purchase and further streaming on most major online music platforms. This includes the likes of Spotify, Amazon, and Apple Music. Physical / merch options are now available to those who CLICK HERE.

If you wish to follow along with the band directly and see what they’re up to next, they’ve parked their legions on platforms such as Facebook and Instagram.