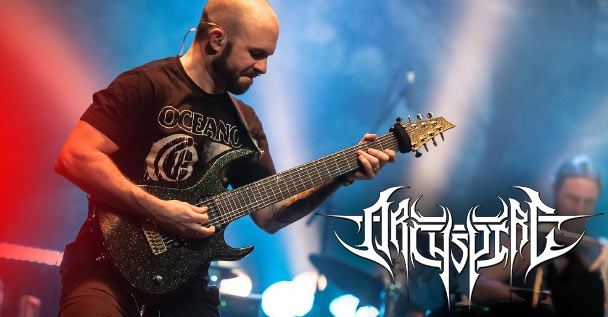 We recently had the opportunity to ask Archspire guitarist Dean Lamb some questions. Instead of drafting them ourselves, we let The Circle Pit followers ask Dean whatever they wanted. Naturally, some of the questions we got were more ridiculous than others. However, we sifted through them and sent some of them off. Here are the answers to your burning Archspire questions…

Getting faster is all about setting muscle memory correctly, and you won’t get very far until you slow down to what I call, “painfully slow.” It’s around 40bpm, a tempo that teaches you patience as well as technique. Setting your muscle memory there, as well as getting rid of bad habits is the only way, in my opinion, you’ll raise your speed ceiling cleanly

“Although you write insane tech death metal, what is a guilty pleasure you have (if any) with music?”

I enjoy some acoustic artists, but I generally listen to death metal or romantic/baroque era concert music, as well as a bit of early 20th century composers like Ravel or Debussy. But for my money (of which there isn’t a lot) Bach is the best hands down.

“Which bandmate parties hardest and how?”

Oli and Spencer have been known to get pretty wasted after a show, but I’m always waiting for Tobi to get into the whiskey. He whips out these absolutely hilarious insults that you would never expect.

“Ask him about the inspiration for the lyrics on their new album and if it’s really about that one Japanese cult or if they’re talking about something else!”

I can neither confirm nor deny this claim.

Oli makes a delicious hot sauce, I had a bottle in my fridge after we shot the “Tech Ones” tour promo video. It was quickly consumed.

“Does he really only have five fingered hands?”

I have five-fingered hands yes. Five hands, each with one finger.

Necrophagist, Decapitated, The Faceless, Soreption, Fleshgod Apocalypse, Origin. These were the bands that we all loved when we first started jamming, and we decided, “Let’s just do that, but as fast as we possibly can.”

“Are you guys cyborgs?”

Well, on stage we use in-ear monitors, we program our laptop to send midi commands to change patches on our amps, we dial in our mixes on our phones, and we play to a metronome with cues and count-ins. So, yes I guess we are cyborgs.

“Ask him whether he thinks going this fast will enable him to outrun god.”

Is God known for his running skills?

“I don’t want to ask anything, just tell him I love him … No homo… Or maybe homo”

Not that there’s anything wrong with that!