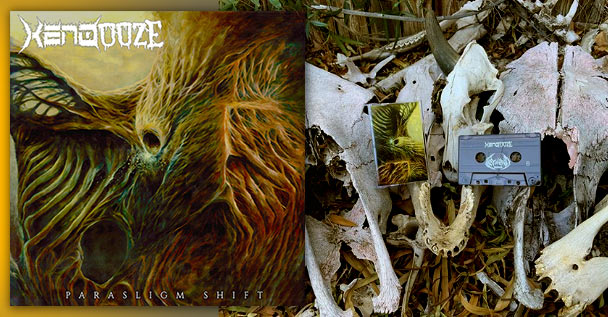 Once upon a slime… There was a sound secreted from the bowels of a toxic wasteland planet that was so raw and alien it caused the total shutdown of human senses. You’ve been warned… This is Xeno Ooze.

Under closer inspection, we have a new band making their presence known from Phoenix, Arizona (aka Space). They’ve signed on with Last World Records and now they’re primed to do some damage to unsuspecting eardrums.

This band’s weapon of choice crosses elements of Grindcore and Death Metal but it’s safe to place them much closer to the grind time side of that particular spectrum (maybe with a little Rhythm and Ooze). Their sound is brutally bestial, coldly technical, and in some ways… purposefully sloppy as hell.

At first, this all came together on their “Demooze” release which made the rounds last year. Clearly not ones to rest on their laurels, Xeno Ooze have already crafted and released what could be considered their debut album. Landing on Earth earlier this month, the new record goes by the name of “Parasligm Shift”.

The entire record spans only 17 minutes in length. However, it manages to pack quite a few solid punches in that short time span. The only reason why we list this one as an album instead of an EP is because a) the number of tracks provided and b) ya know… Grindcore.

If you’d like to give the record a listen, this is your lucky day! We have streams for “Parasligm Shift” provided up and down this very page. You can also stream and buy the goods through most major online music platforms. This includes the likes of Bandcamp (where cassettes and physical copies are also available), Spotify, Amazon and Apple Music.

Now… to ooze or not to ooze? That is the question…

The band wastes no time pulverizing listeners as a formidable wall of sound immediately comes crashing into focus with the album opener “Xenological Warfare”. This track displays all the elements listed above and some… All in all, this is a great introduction to the record in that it shows listeners largely what to expect from the band without giving it all away. It’s also an absolute face-melter and easily one of my favorites put forward on “Parasligm Shift”.

I’d actually say a number of my favorites land on the front end of this record because “Slime Against Humanity” and “Wizard of Ooze” also do their due diligence to show the better side of this band. Numbers like the single “Dungeon Blaster” (which we hosted here on TCP), the ender “Buried by Slime & Dust” and “Destroy the Slopposition” also stand out in my mind.

Now, it’s worth noting that (with a few exceptions) I don’t usually stray into the realms of Grindcore… However… This band is, by far, one of the better encounters I’ve had in some time. Where some Grindcore bands seem to be an unsalvageable, stupid mess of dirty sound, Xeno Ooze rise above with a certain talent, focus, and professionalism lacking from so many others (despite still falling into some of the genre’s tropes). This is a band with something to ooze!

Probably my favorite part of this record is how Xeno Ooze harbor a blatant disrespect of timing. These guys operate in different slime signatures. Things rarely remain steady in terms of tempo as they play around from the beginning to end of “Parasligm Shift”. Perhaps my favorite example is on the opener “Xenological Warfare” shortly after the 1:50 mark when the band consciously winds things down only to rev them back up to a vicious pace.

There are moments on this record that come packed with such a high level of scathing energy that you have to love it on some level if Extreme Metal scratches an itch in your ears.

However, as mentioned, this record can be sloppy as hell… but in a kind of raw and lovable way. The production is very much demo quality so if you’re expecting something highly polished, you’re probably in the wrong place. It is Grindcore at the end of the day… I would say it’s a step in the direction of better quality than “Demooze” but it’s far from the standout point of this record… Especially when you consider the stark difference of sound in a track like “Buried by Slime & Dust” in comparison to the rest of the album. It feels slapped together. Also, for the most part, I’d say the band is tight but I’d also say some moments come across much tighter than others. On the other hand, it does appear to be an organic recording (which was also self-produced if I’m not mistaken) so I have to respect that.

Instrumentally, this band managed to impress me several times. They’re clearly talented from the kit to the strings, pummeling away as a singular unit through varied tempos and approaches. There’s a smorgasbord of blastbeats, beatdowns, and general extremity to be perused here.

Vocally, things are also quite varied. Everything from the low end to the high end is covered with a few twists here and there to keep things interesting. I’d say the vocals across this record range anywhere from highly enjoyable to dime a dozen in execution.

There’s a moment of banter and sample transitions between some tracks. Of these, my favorite was the sample at the beginning of “Buried by Slime & Dust”. The talking between band members to start off “Grind//Splatter” didn’t do much for me though – it honestly made the presentation feel more amateur-ish while simultaneously removing my ears and mind from the xenological theme of the record. The “woooo!” on “Wizard of Ooze” had the same negative effect on me despite my overall enjoyment of that track. It’s cool that they’re having fun, but it doesn’t enhance the experience in my ears.

On that note, one of my main takeaways is that Xeno Ooze appear to be a young band. Not only is this just their second release to date, it has a certain amateur feel to it. I would say that it has leveled up from the “Demooze” material but there’s still clearly room to grow. This can actually be viewed as a good thing considering Xeno Ooze is one of the more promising Grindcore acts out there in recent years. It does ultimately beg the question… what’s next?

As another highlight, I have to say some of the punny titles on this album made me laugh. For example, “Wizard of Ooze” is a classic and you can’t deny the album title “Parasligm Shift” itself. It’s also worth noting that their “Demooze” release had some good puns on it as well! They’re of much higher quality than the puns I’ve attempted to pack into this review.

On that note, the names that the individual band members have adopted are also somewhat amazing (maybe “titles” is a more appropriate word than “names”). Just for example, they have a member named “Oozimus Slaximus, Seer & Prophet of Slime” and another member named “Father Fungus, Archbishop of the Unholy Ooze”. That’s just scratching the surface because there are four members making up the full Xeno Ooze line-up.

Now, to sum things up… I don’t feel like I can properly rate this album by my usual review standards (especially considering I’m not a big “Grindcore person”). That being the case, I think it deserves an unusual rating (which I imagine the band would appreciate more anyways). This one gets a goody two-ooze out of 10. I’d generally say the record ranges anywhere from slop notch to really good to decent to whaaaat? That being said, if you’re a fan of Grindcore or you just have nothing to ooze, definitely give this thing a spin!

Once again, you can sample the wares through the streams planted on this page. You can also stream and grab the goods through platforms like Bandcamp (where the physical copies dwell), Spotify, Amazon and Apple Music.

If you enjoy the music, also consider showing Xeno Ooze some support through social networks. They can currently be found on Facebook and Instagram.

You ooze, you lose…