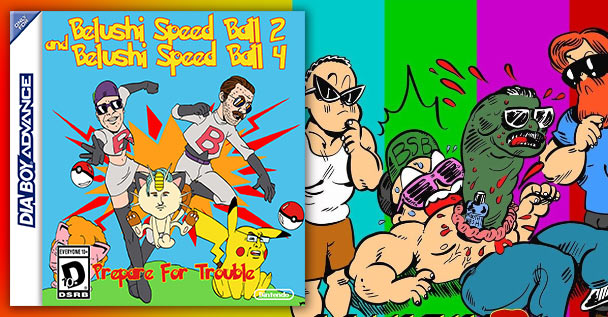 …and make it double!

Here’s a band quite unlike any that you’ve seen to date. Belushi Speed Ball are a Kentucky-based troupe morbidly named after the death of the famous actor John Belushi while, akin to his legacy, managing to pack a whole Animal House into a small span of time. To completely contrast the name choice, this is a shot of pure fun and adrenaline just waiting to throw unsuspecting listeners off.

This all comes crashing together on the band’s new EP with the Pokémon reference title of “Prepare For Trouble”. The record strings together 7 tracks over a 20-minute runtime composed of absolute madness. You can give a listen for yourself through any of the streams provided across this page.

It’s also worth noting that this is the first time I’ve ever seen a record released for the Gameboy and Gameboy Advance. That’s right… you can literally buy this EP and play it through your Gameboy Advance (still think I have one stuffed away in a drawer somewhere…). You can check the purchase options for that by CLICKING HERE. The demonstration video for the Gameboy cartridge can be seen right here:

If you’re not the proud owner of a Gameboy Advance… fear not! The record is available across most major online music platforms. This includes the likes of Bandcamp, Spotify, Amazon, Apple Music and so on.

It’s also worth noting that this band has been at it for a decent time now. They’ve consistently been releasing records since 2014 with is being their 5th to go public.

They currently have four members to make this happen (all of which appear to be limited to first names). They are guitarist / vocalist Vinny, bassist Jazzy, and drummer Daniel. Señor Diablo is also considered a part of the band as their manager / rabble rouser / head of “yoo-hoo distribution”. Altogether, they make the party happen.

With all that being said, let’s dissect the trouble this particular record brings…

I would love to review “Prepare For Trouble” with that opening line from the record’s opening track but it wouldn’t be entirely accurate. This band can be pretty damn silly but they certainly aren’t blah in their delivery. Actually, before this song really even kicks off the EP opens with a clear display of the energy Belushi Speed Ball can bring. This is shown as they quickly win over a crowd with a silly Bikini Bottom chant of “Are you feeling it now Mr. Krabs?” which then leads into the aforementioned bit.

On that note, there’s an impressive amount of references across this record. Beyond the obvious Pokémon nod on the cover + Gameboy release, there are blatant references to the likes of SpongeBob SquarePants (as was just hinted), Rick And Morty, Dragonball Z, and more. It’s kind of fun to see how many references you can pick up on while listening.

That being said, it’s beyond obvious that Belushi Speed Ball are a bunch of the best people… NERDS! Better yet, they’re nerds with a great sense of humor and an infectious energy. All of this put together makes for a good time.

Back to the winning over a crowd bit, the live show seems to be a huge part of this band’s appeal. They rarely throw a show that doesn’t turn into a raging, weird as hell party. There’s plenty of video evidence to support this. All one has to do is peruse the band’s YouTube channel to see.

On the other hand, their recorded material is a bit raw and ridiculous. Musically, I’d place it somewhere along the lines of classic Crossover Thrash. This is true from the songwriting itself to the thin quality of the production. It sounds like something out of another decade.

There’s clearly some thought in the composition and some talent present but it’s beyond obvious that Belushi Speed Ball don’t take themselves too seriously. It’s actually kind of a lovable quality in an ocean of bands that take themselves way too seriously. Now, does that translate to album of the year type material? Hell no. Not even close. But is it enjoyable? Yeah, I’d say so.

Most of these tracks managed to make me laugh or keep me entertained for one reason or another. Better yet, some moments on this record had kickass little musical sections to drive the energy and the comedy behind the record. All in all, it made for a nice break from the usual fare while applying a bit of a nostalgia fueled smile to the face. I highly doubt it will be everyone’s cuppa’ tea but it’s pretty damn engaging for what it is. If any of these tracks appeal to you, I would say they’re all worth a spin.

The EP is broken up by a series of comedic skits to keep things on the swivel between tracks. One of my favorites is at the end of “Saxual Tie-Ran-O-Sar” where they discuss their favorite dinosaurs. There’s plenty more where that came from…

When it’s all said and done, I really can’t properly compare this record by the same parameters that I usually use while writing a review because this band lays outside those parameters in terms of my enjoyment. This new record from Belushi Speed Ball is so many things – silly, fun, nerdy, stupid, enjoyable, comedic, creative, energetic, etc. For that reason, this one gets a solid ¯\_(ツ)_/¯ out of 10.

Once again, to give a listen for yourself, the music can be found across this page and on platforms like Bandcamp, Spotify, Amazon, and Apple Music. And let’s not forget… it’s available on the god damn Gameboy! Who else can say that!?

If you want to keep tabs on Belushi Speed Ball’s antics, they’ve set up base on social media. More specifically, they can be followed on Facebook, Instagram, and YouTube.

Also, it goes without saying, if you ever get a chance to see Belushi Speed Ball live – do it! This kind of party fueled madness is hard to find. This even includes an upcoming wedding celebration!

ARE YOU FEELING IT NOW, MR. KRABS!?